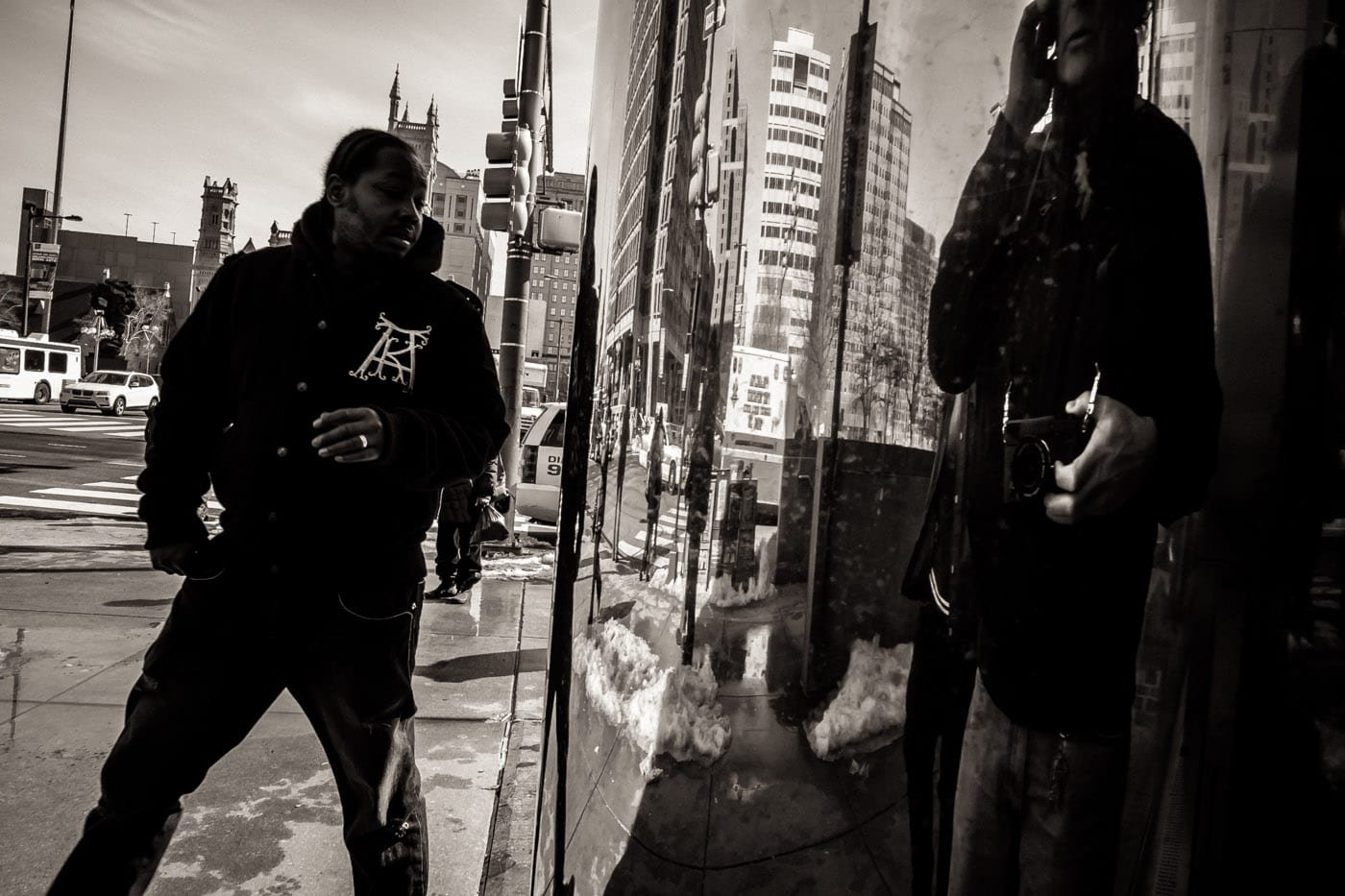 So I’m standing on John F Kennedy Blvd around 15th Street and I’m minding my own business talking to Olivier on the iPhoney 5. Well, Andre’, Andre’ is my Fuji XP1 and youse all know that ’cause you read my blog on a regular basis, anyway he’s starting to shake and vibrate in my hand. I have to talk with Olivier I said to him but he insisted that I pay attention to him. So my thumb got to the soft release and I started to look…..Andre’s told me that he would handle the framing and exposure, all I had to do was press the shutter when he said to. After a few seconds this guy comes into the scene and I can see my reflection but more that that, I can see the photo as I am bout to make. then all the sudden….CLICK! 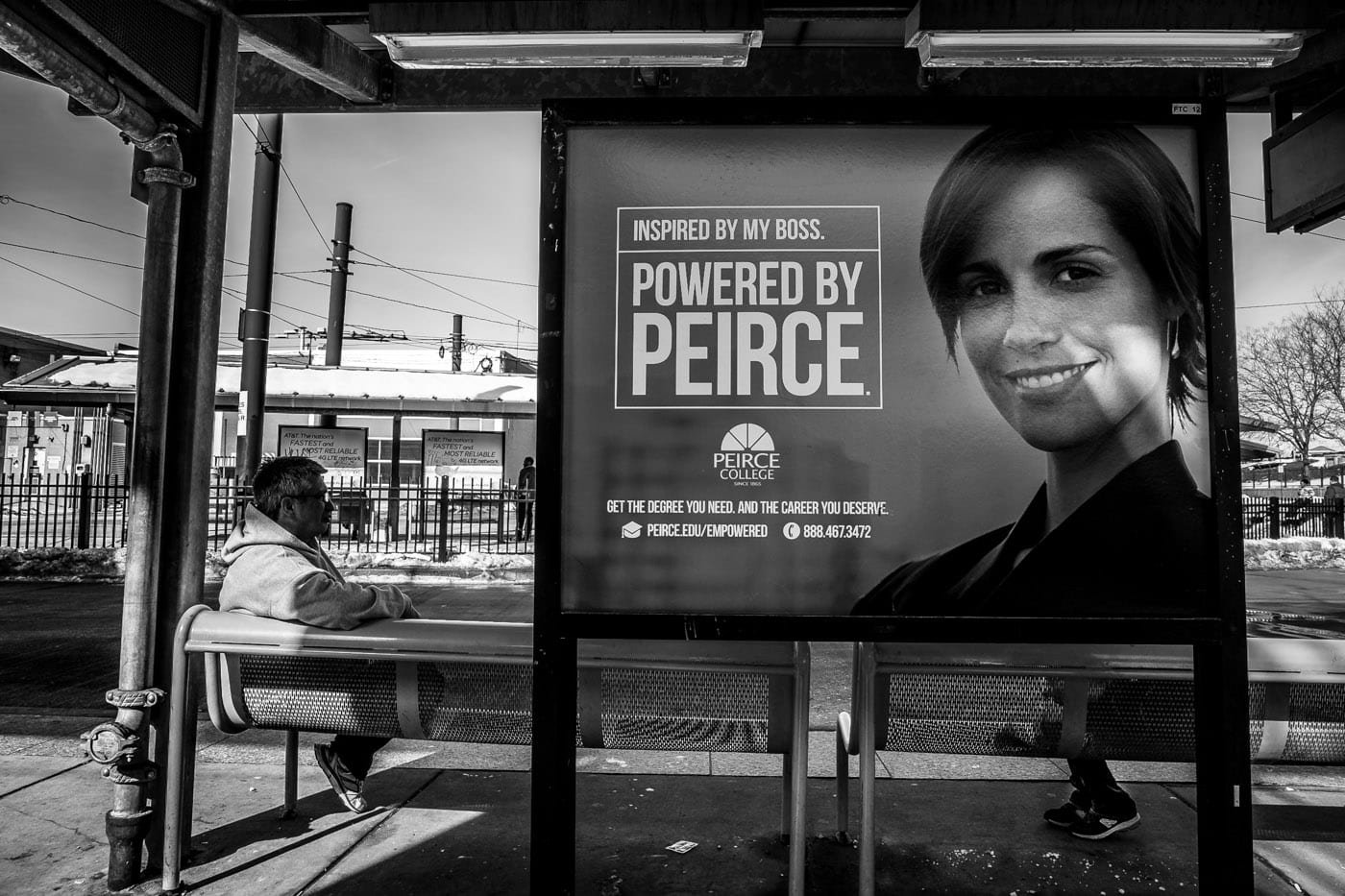 I’m prepping for a workshop soon and  one of the things I push and push hard is JUXTAPOSITION. It’s a multi-faceted concept but one I feel is most important to learn. The above is an example I know will bring up ideas and conversation. 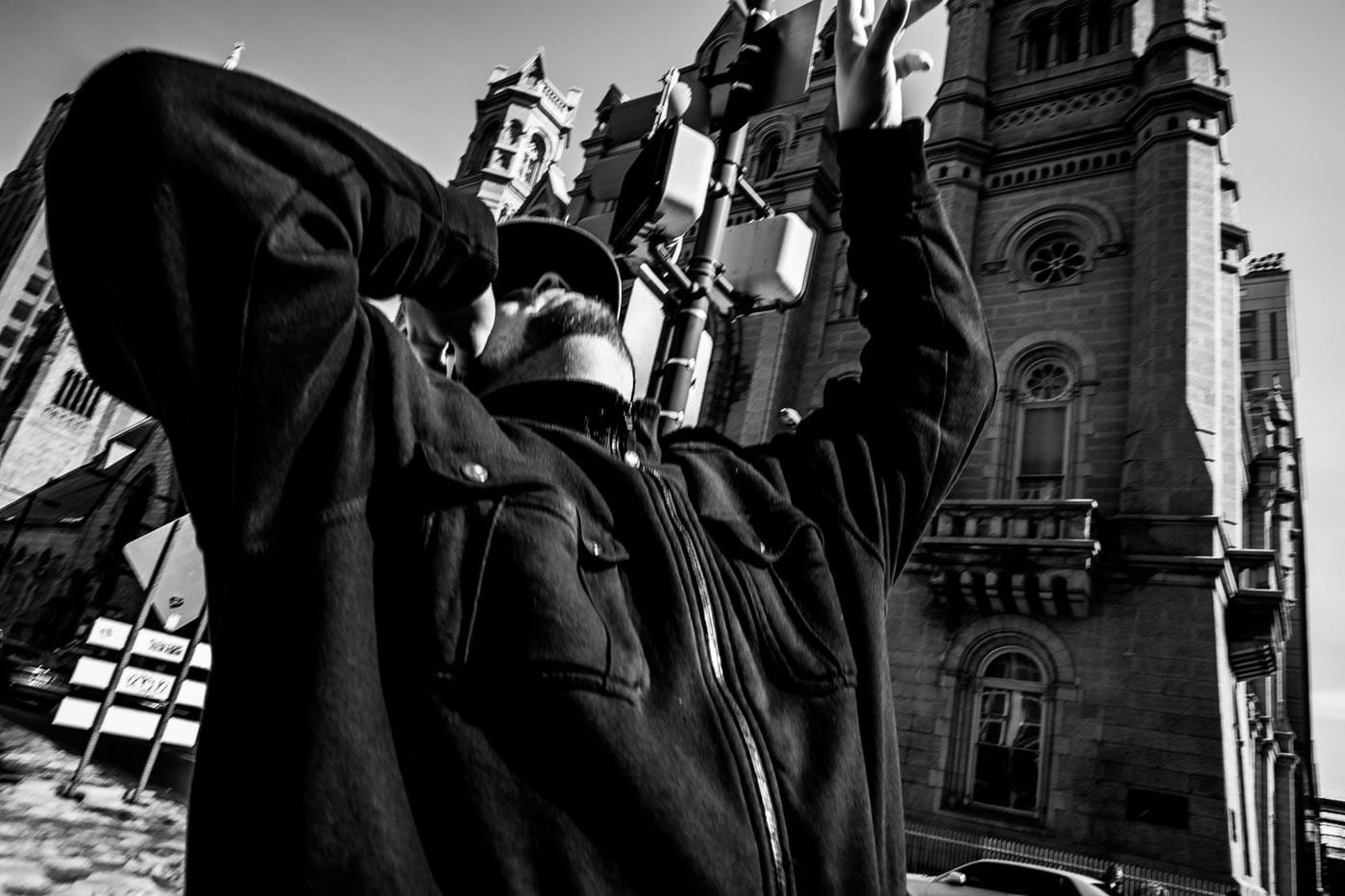 Whats very cool about the XP1 with the 15mm Heliar is how close you can get to things and even crazy people. I’m right under this guy and I used the OVF. I can see the 4 corner brackets to frame and my experience is they are accurate but with the 15mm, it’s off on the right side. I’m not anal about this sort of thing and if you are, flip the lever and use the EVF.  So I saw this guy doing his thing and all the people except me were moving away from him. I mean they were really getting space and that was good for me as I could move in close like I try to do in this situation. Well,as I was walking I set the aperture to f/5.6 and bent down right in front of him….I’m quick and I try not to rush at all….so I was taking my time and this guy never knew I was close enough to him to smell the Coors Light coming from his breath. 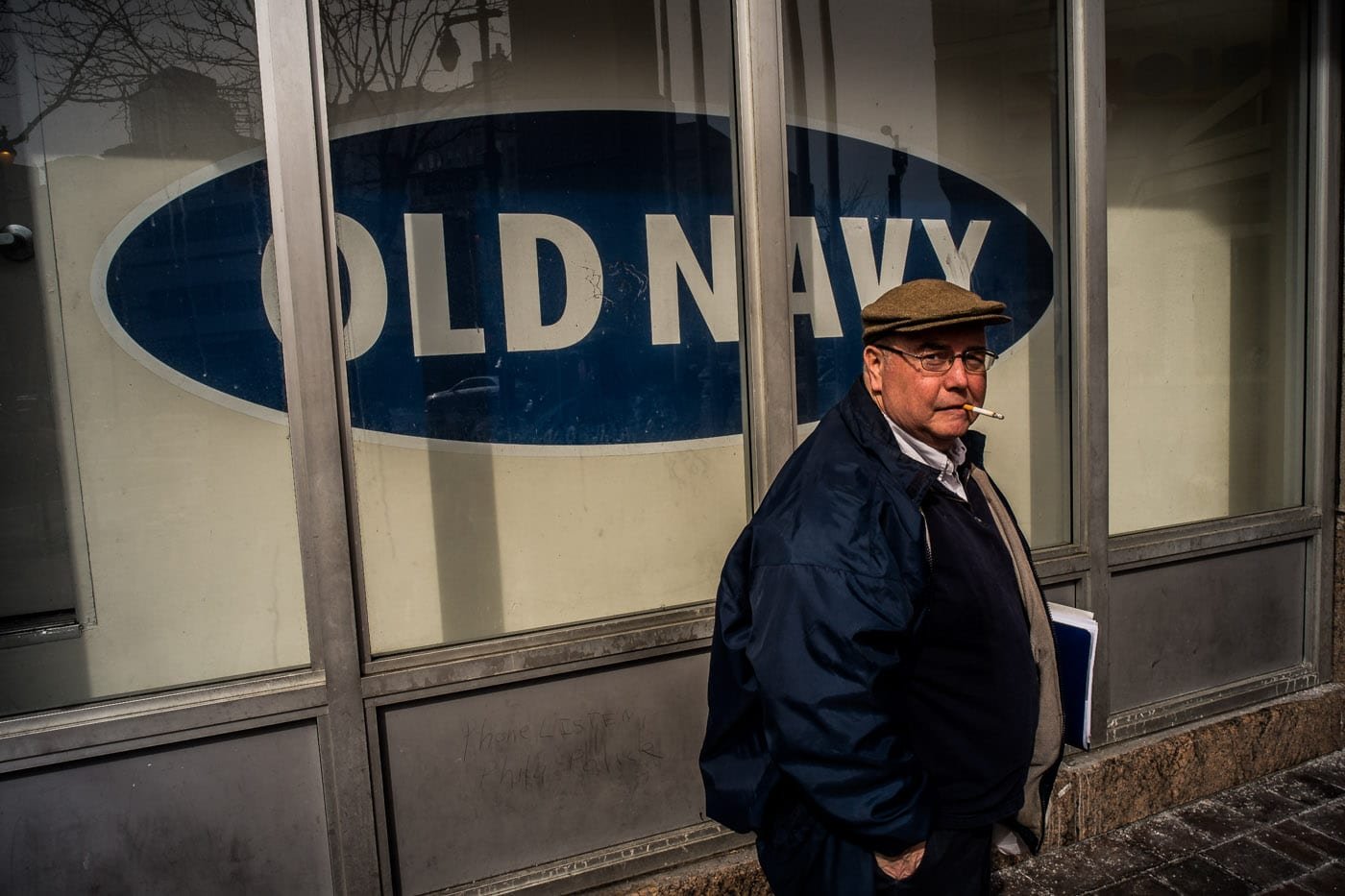 Color doesn’t really excite me but I am open minded to what it brings to the image. Eh…sometimes ya have to surrender to the voice of the photo no? Well, ifI have to do color, at least it’s my favorite dominate. I’m telling ya, I was so close to this guy that I didn’t realize it until I looked off camera. I used the EVF here so I can’t see anything but thee screen. So I backed up again and moved to where the color worked and the sign related to the man and then I waited for him to see me and as he looked …..CLICK. In a second he asked, “how do ya like the XP1? I was in shock…I mean how could he have known about Andre’? Si I handed him the camera and he smiled and I mean really smiled. He asked how much and I explained the about price and directed him to a store to get it. I gave him a list of mush have lenses and he was happy and so was I. 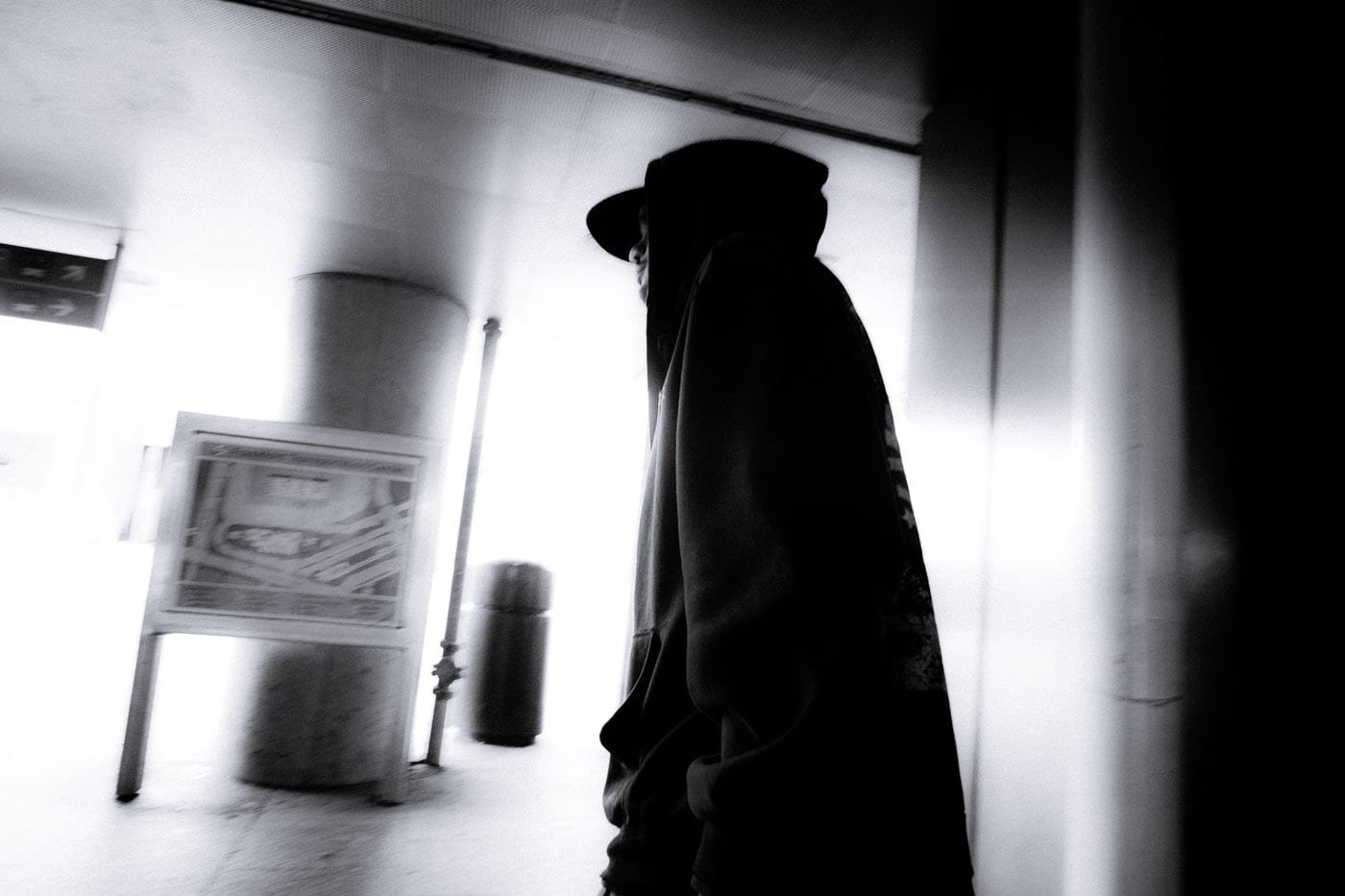 My Dreamcatcher series is developing very nice and I have a very good response and print sales. So whenever I get the chance, I ….CLICK.

Tomorrow is another day and the weather promises rain and warm temps………..