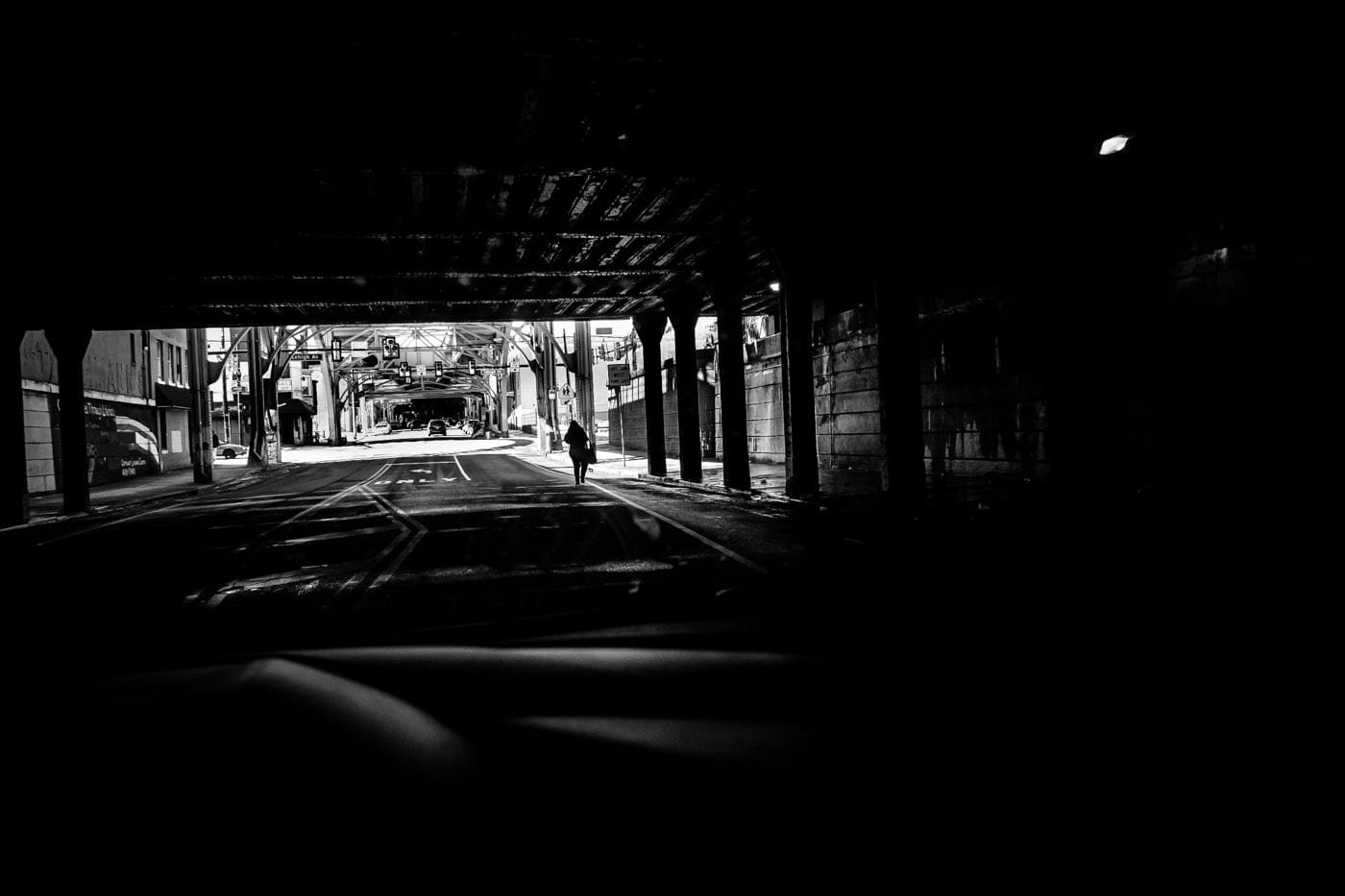 So I was returning a ZIPCAR to it’s home in Center City and decided to drive down Kensington Avenue. I had the XP1 and the 18mm on because it’s the most natural FOV I have. I never have to guesstimate a frame, I just raise the camera and it’s usually 90% on target. So I was cruising and I felt like a John looking for a Trick. Then as I approached the Lehigh Avenue Bridge, I see this girl walking underneath. It’s a famous spot for picking up girls that need money for whatever. I know about this because I am a man of culture, well…street culture. I was working on a series out there at night time photographing the dealers, hookers, thieves even many cops that I know. Anyway, I realized that i finally found my trick and she made a nice shot for me. Hey…hey…photo only, ok! 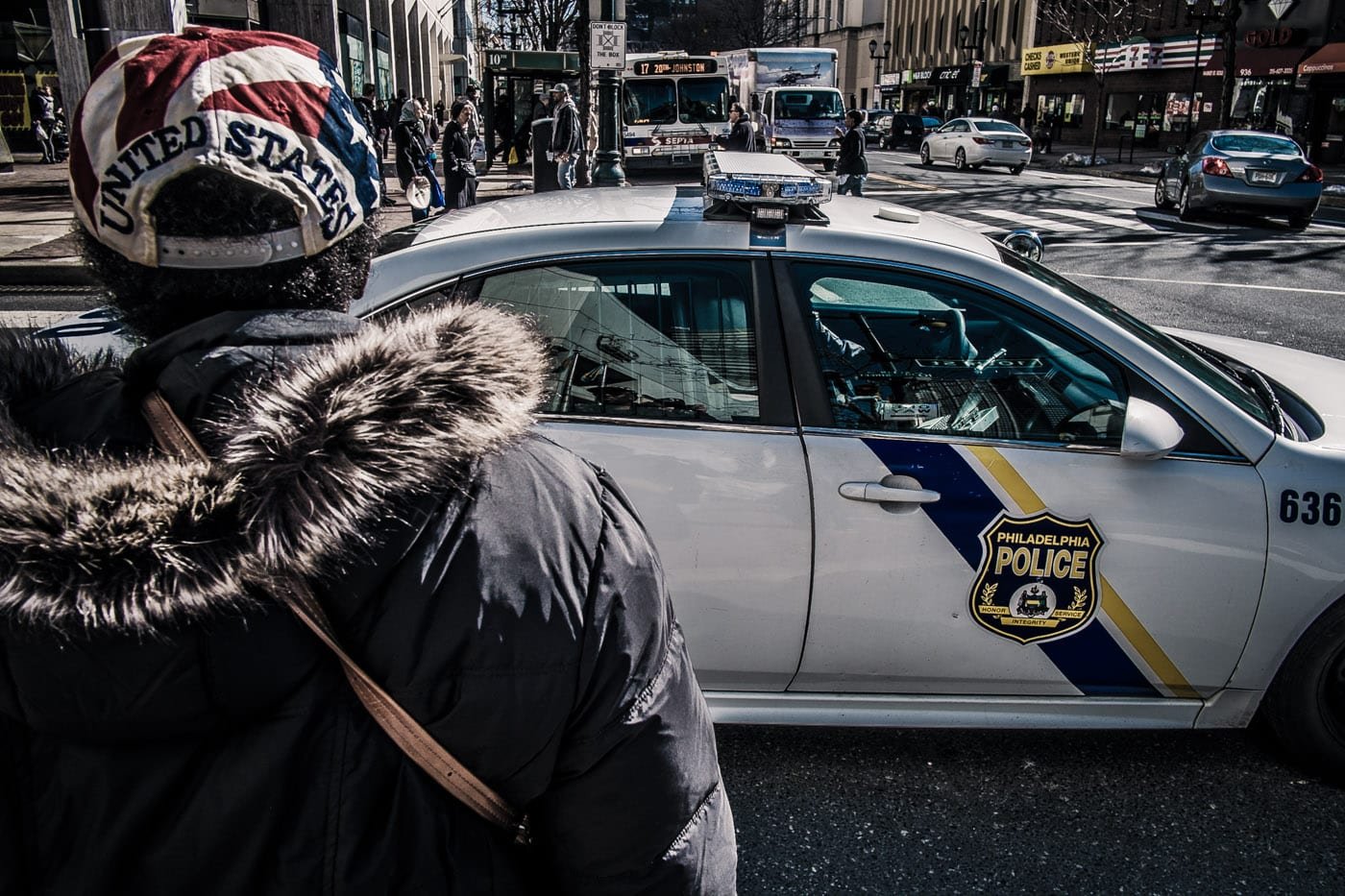 I got a thing for Icons, most will trigger me. You can read what you want in this shot as it’s open to viewer interpretation. For me, it’s just a continuing “Sign Of The Times”. The thing about the 18mm is that it lets me get close and I love that. Most times when I use a different focal length, I feel restricted. So much so that the restriction starts on loading the lens on the camera. Last night I put the 35mm 1.4 on and was excited about using it this morning. So, I came into the back room that’s not my photography office but just a converted room for whatever Tanya wants to do with it. As I entered my office, I could see Andre’, my XP1, starting to get excited about going on a walkabout. My friends in OZ tell me that, that’s what I do, I go on walkabouts. As I drew closer to Andre’, he looked somewhat put off. He winked at me thru the OVF, cameras can’t wink from the EVF, must be an OVF. I got the message. See, he’s a real gentleman and he didn’t want to upset the other lenses on the shelf but he wasn’t going anywhere without the trusty 18mm. So I pulled the 35mm 1.4 off and placed it on the shelf. Then as the 18mm was being loaded on Andre’, I could feel that he was right and things were better this way. 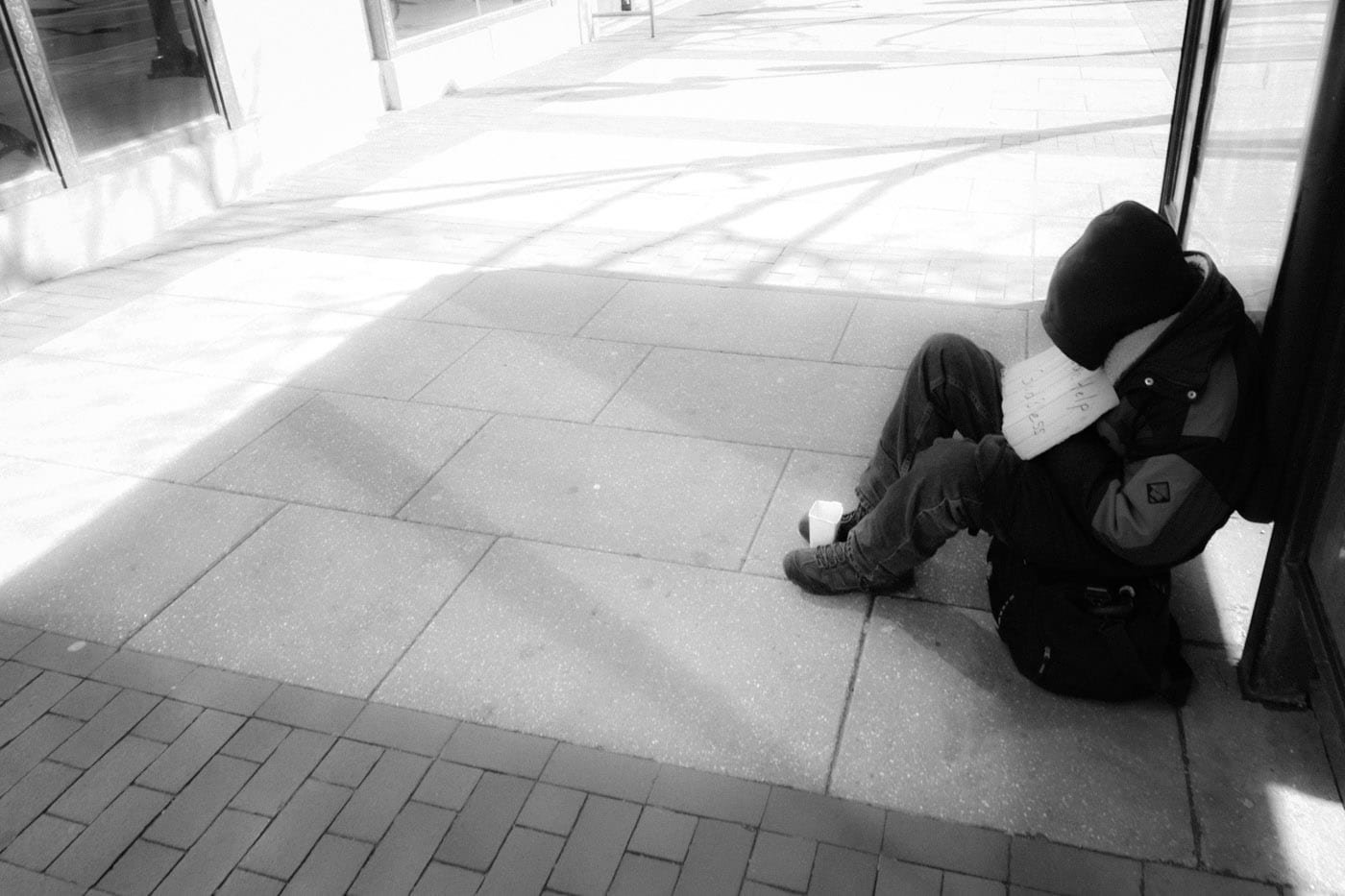 I always ask the homeless when I can if they go to a shelter. Many do but many also say, it’s not safe and they will take their chances on the street.

remember many years ago that I was shooting as a freelancer for the Bulletin Newspaper here in Philly. I guess it was around 1974. I was home from Nam already and the Editor Jack, felt safe that I could handle myself out there. So I spent a month on the street. I just had my M4, 35mm Cron and bunches of Tri-X. There was a section around 8th & Vine that was called The Bowery or Skid Row. I got into a few scraps but nothing serious. I slept where the bums, (The city leaders called these homeless people BUMS). Ok, I’m a bum now too I thought. I met a white guy that appeared to be about 45 or so. One of the guys told me to talk to him cause he’s real interesting. Turns out he was a Doctor. He did all the medical things he could for the guys and gals and I asked him one day what the heck he was doing there.

He said he was from Bryn Mawr and he caught his wife cheating on him. They had 3 kids. I said, so get a damn divorce. He replied, never, it would cost me more that it cost now. I live on the street because I want to, I want her to suffer as much as I am and when the money runs out, I won’t care. I asked about his kids and he said they will never want for anything. I found many interesting stories out there and many. many powerful photos.

When I see a person like this, above….my heart and mind go right back to 1974. 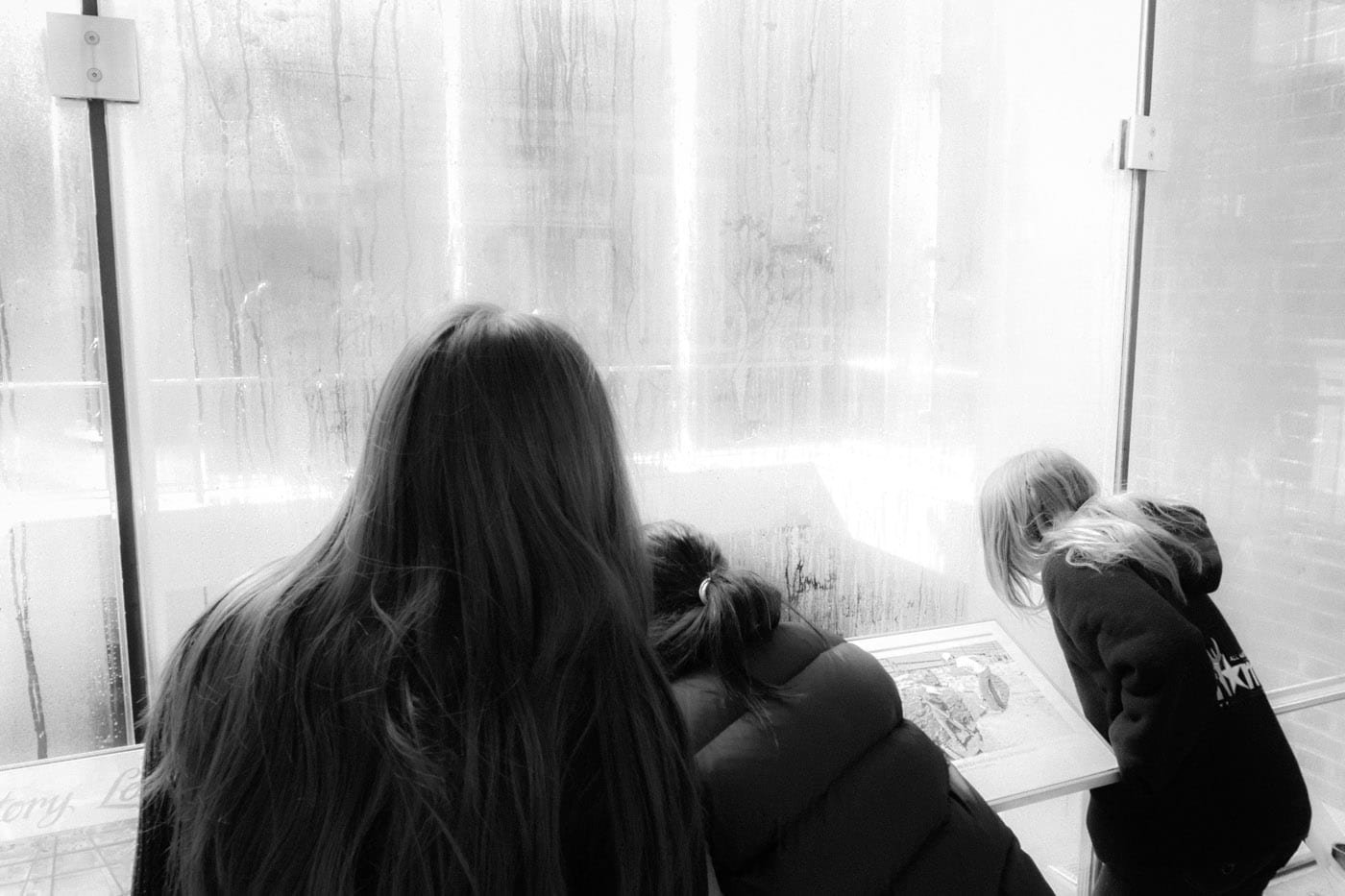 Dreams come in many shapes and thoughts and ideas. I saw this woman with her 2 kids and I thought, what would of happened if I didn’t get a divorce from my kids mother?  Simple answer is probably I wouldn’t be shooting my XP1 or playing my Strat’s and Tele’s. The kids are fine so……end of that…! 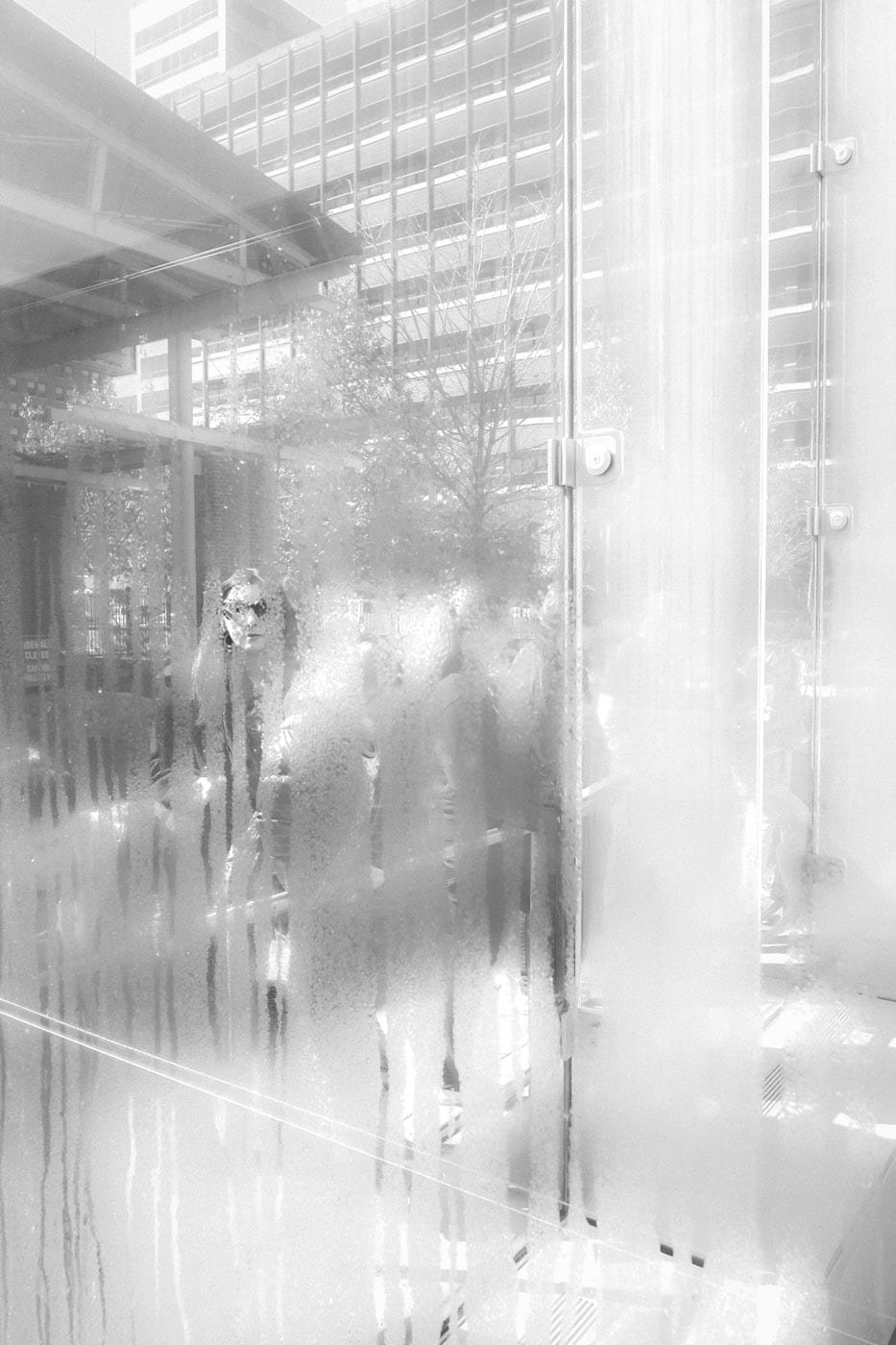 I was looking thru the glass that was sweating and I saw this woman looking back at me. I was flattered of course, I ain’t stupid but not flattered enough to miss the shot. She walked to me and asked if she could see what I took. I told her, I didn’t too anything, I made a very nice photo of you. When she asked if I could send her a copy, of course I was flattered again. Funny what young woman can do to the process…… 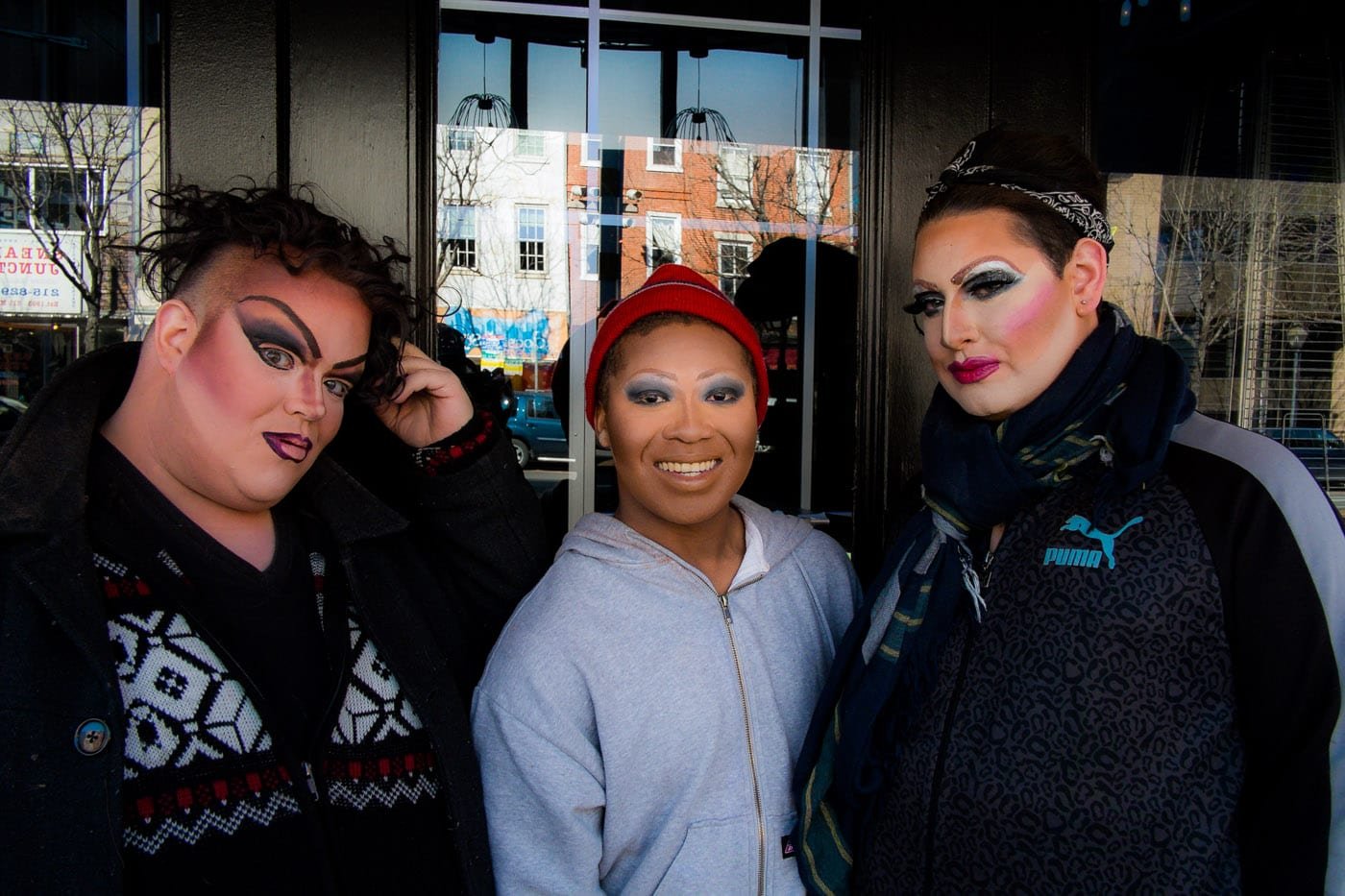 So I’m walking to 2nd Street to get on the Elevated to go home. I walked up on these 3 gals and of course I asked if I could make a photo. I very rarely do that. But I had to this time.

They were flattered and I asked them to move to this window about 5′ away. I made the photo, 1 shot and they asked what I would do with it. I said, I’ll submit it to the Most Beautiful Gal on Market Street Contest. The one in the center blushed and asked me if I knew what was up with them. Of course I said, but your right….Tranny’s aren’t allowed to enter the contest…YET! They all smiled and called me cute…..well, it’s all in a daze on the street.

Have a good weekend…..