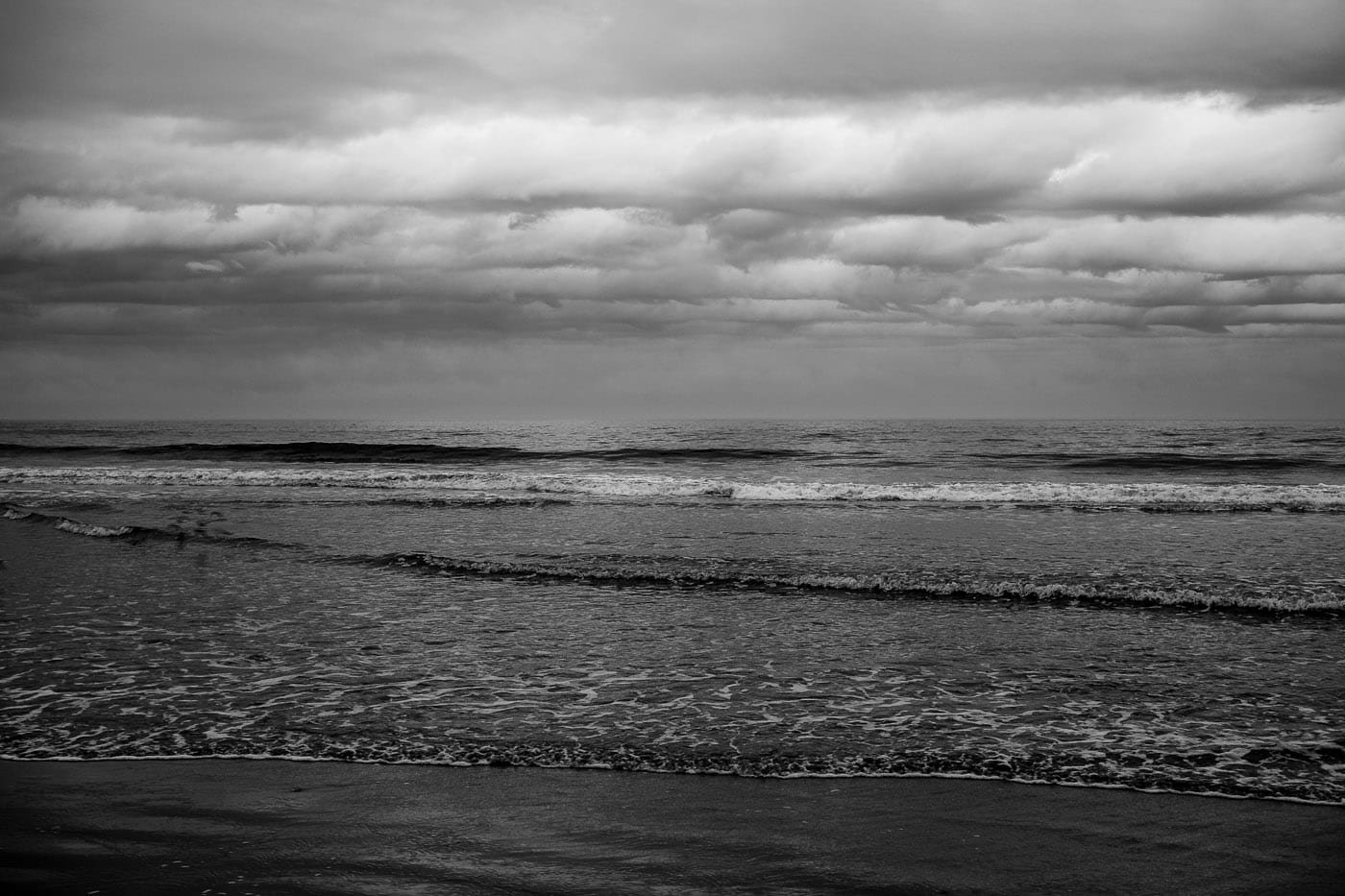 Tanya and I went to Atlantic City to visit Joe and Mary. Well, par for the course….Joe and I went to the beach to get in touch with uh…uh..shhhhhh…a camera store because Joe wants to get the camera all Ricoh shooters ever born or ever will be….the XE1. No, not just the XE1 but the XE1 with the 27mm lens. See, here e go again…that mathematical head game that we all play because some execs and some engineers wanted to see what would happen. Ahhhh, heck…that was years ago anyway.

See, Ricoh makes about the best 28mm lens on their cameras, better than most. Now the issue……many if not all Ricoh shooters wanted a 40mm lens or even camera to go along with their 28mm GRD4 or GRD3 or GR thing, dust magnet that it is. Yeah, that’s right…I said it! Well Fujifilm found out about this from some FBICIASECRETSERVICEXCAMERAMAKERSORGANIZATIONTHAT’SNOLONGERSECRET and they made the 27mm lens that mathematically and optically and every other thingy equals 40.5mm. The ideal combination of course is 28mm & 40mm.

Anyway, back to the beach. Joe had some Russian Vodka under his blanket and insisted that we kinda do more than sip on it but not get to the point that the ladies…nah…the wifeys would suspect that we were drinking at the beach. Well, being the friend and standup guy that I am, I quickly acknowledged Joe and his good idea. I mean after all….with all due respect to da wifeys, bringing back 1/2 a bottle would prove disrespectful. Bringing back an empty bottle would do likewise but..AHHAAAA…finishing the bottle the way 2 Nam Vets would do and send the empty to the ocean but with a shot or two still in it is a show of deep respect to da wifeys and whoever finds this magic bottle.

Now to the important part…… 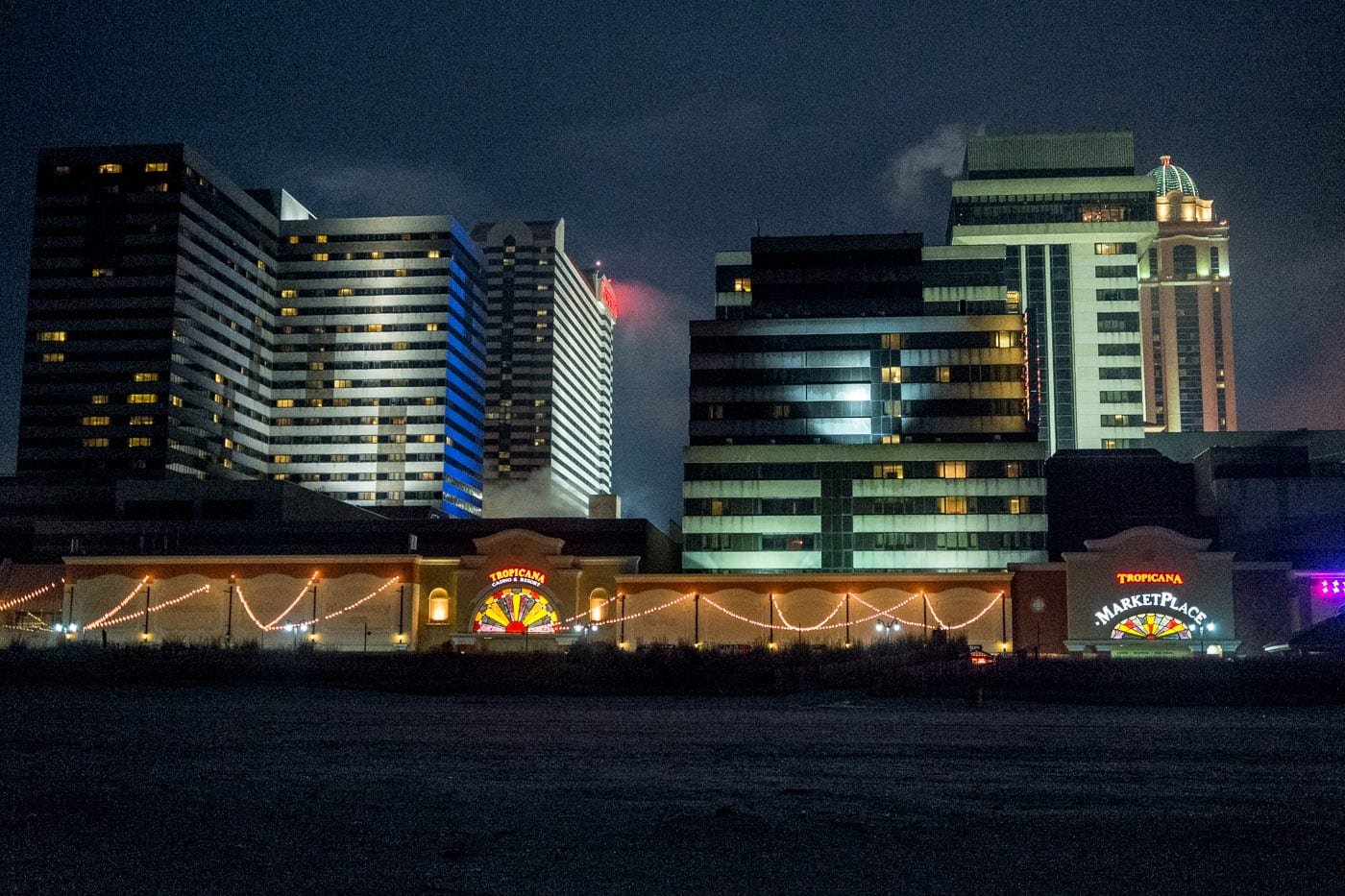 Joe has found making photos a very interesting and positive way to spend time. I have introduced to him that it’s also a way to spend money, not just time. So while we were on the beach, I handed Joe my Fuji XE1 with the 27mm on it. It’s dark man, I mean real dark. Joe made the above photo with my camera. He fell in love very quickly when he saw this shot on the screen. Of course I am in the process of putting together a deal for him on the XE2 and 4 or so lenses. Mary, his wife called me this morning and was very happy. She said that Joe seemed to have found a new love. I told her not to worry because she would always be #1 and this ain’t about a new love, it’s about Joe finding a reason for himself to stay alive and not for her or anyone else.  She thanked me for helping Joe finish the Russian Vodka. 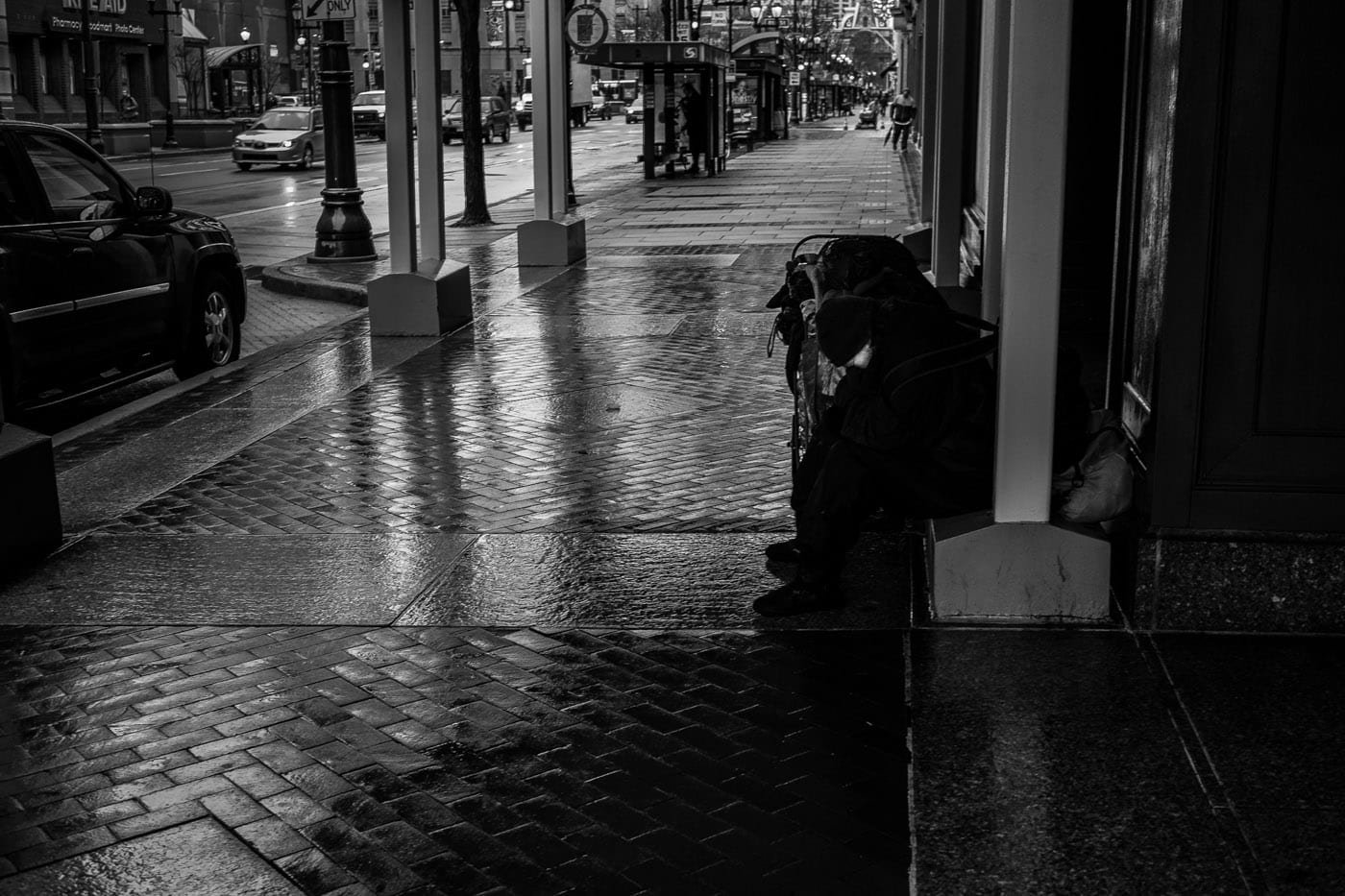 The temp was 61F here in Philly today. As I walked up Market street, I could see many homeless out in the warm rain. Some were taking cover under facades and other things to stop the rain. This lady is about 45 and has no one or no place to go and won’t go to a shelter. 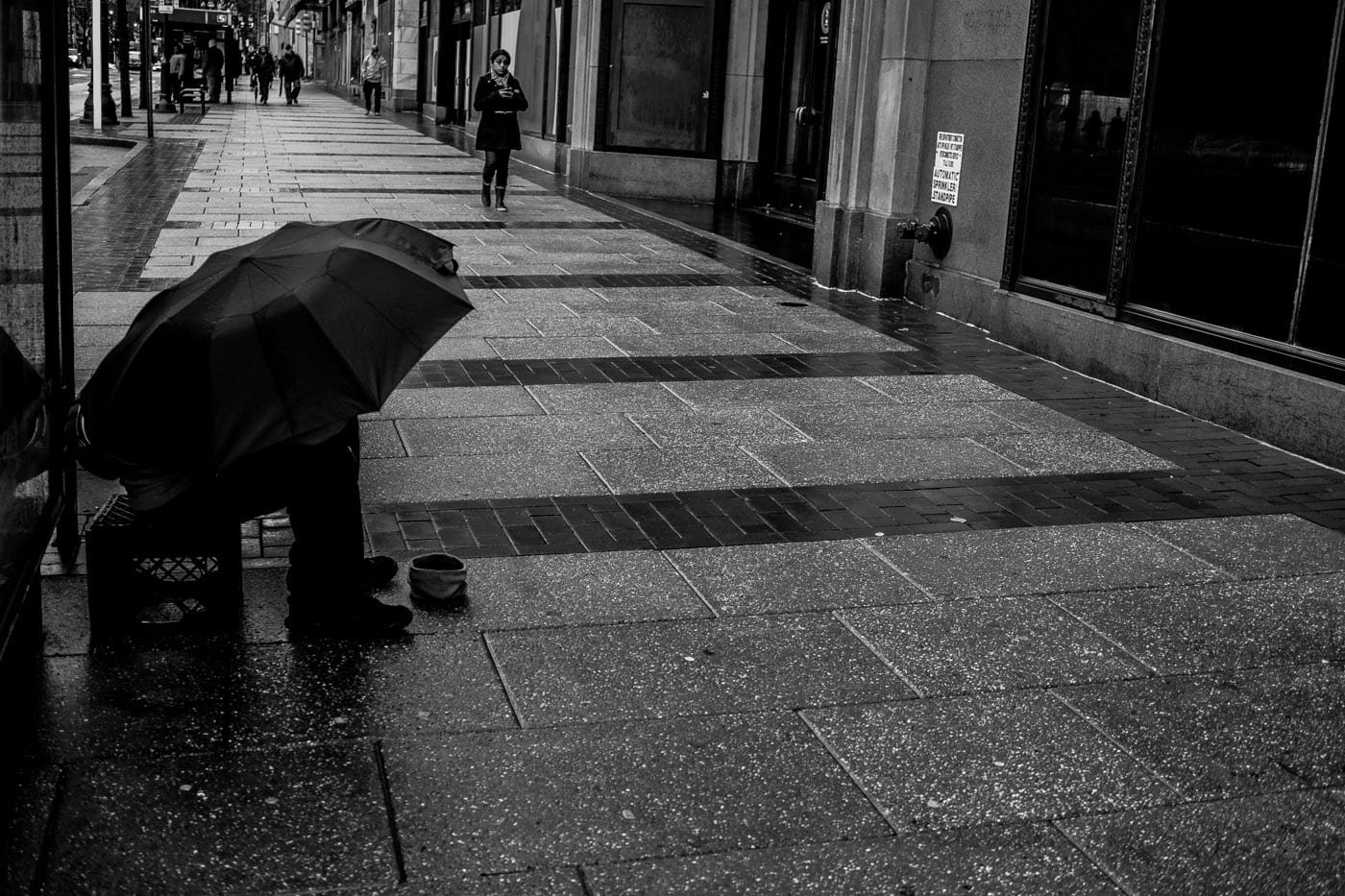 This is all this kid has for a home. He’s maybe 25-30 but is well worn from family etc. I asked if he wanted to go to a shelter and he said no. He was in a few and was attacked and his stuff taken and he was almost raped. 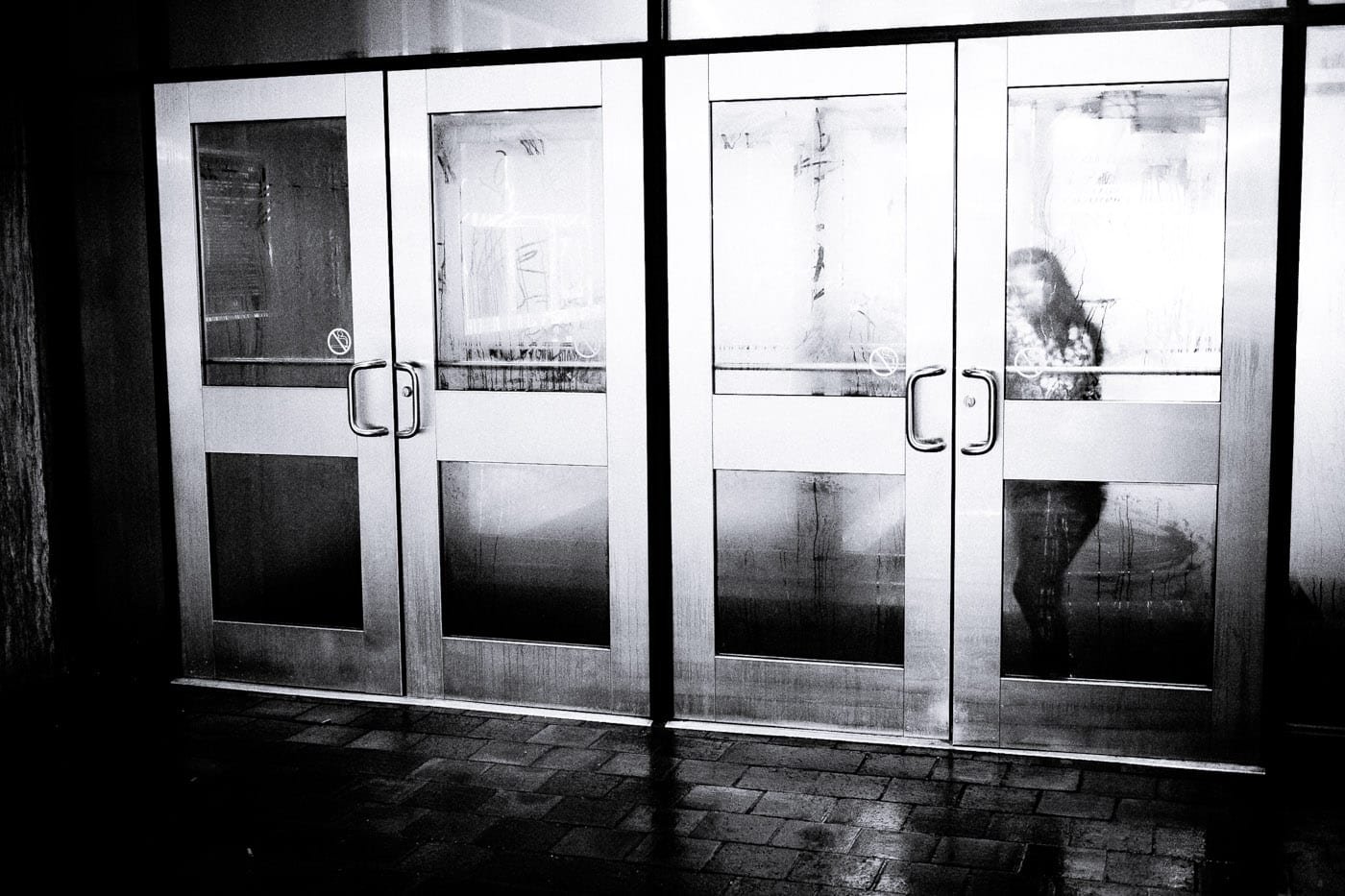 Sometimes I feel like I’m on the other side of life. I see things in my head as I release the shutter and when I get into LightRoom, I find my way.

Thanks for stopping by and I’ll do the best to keep my end going.