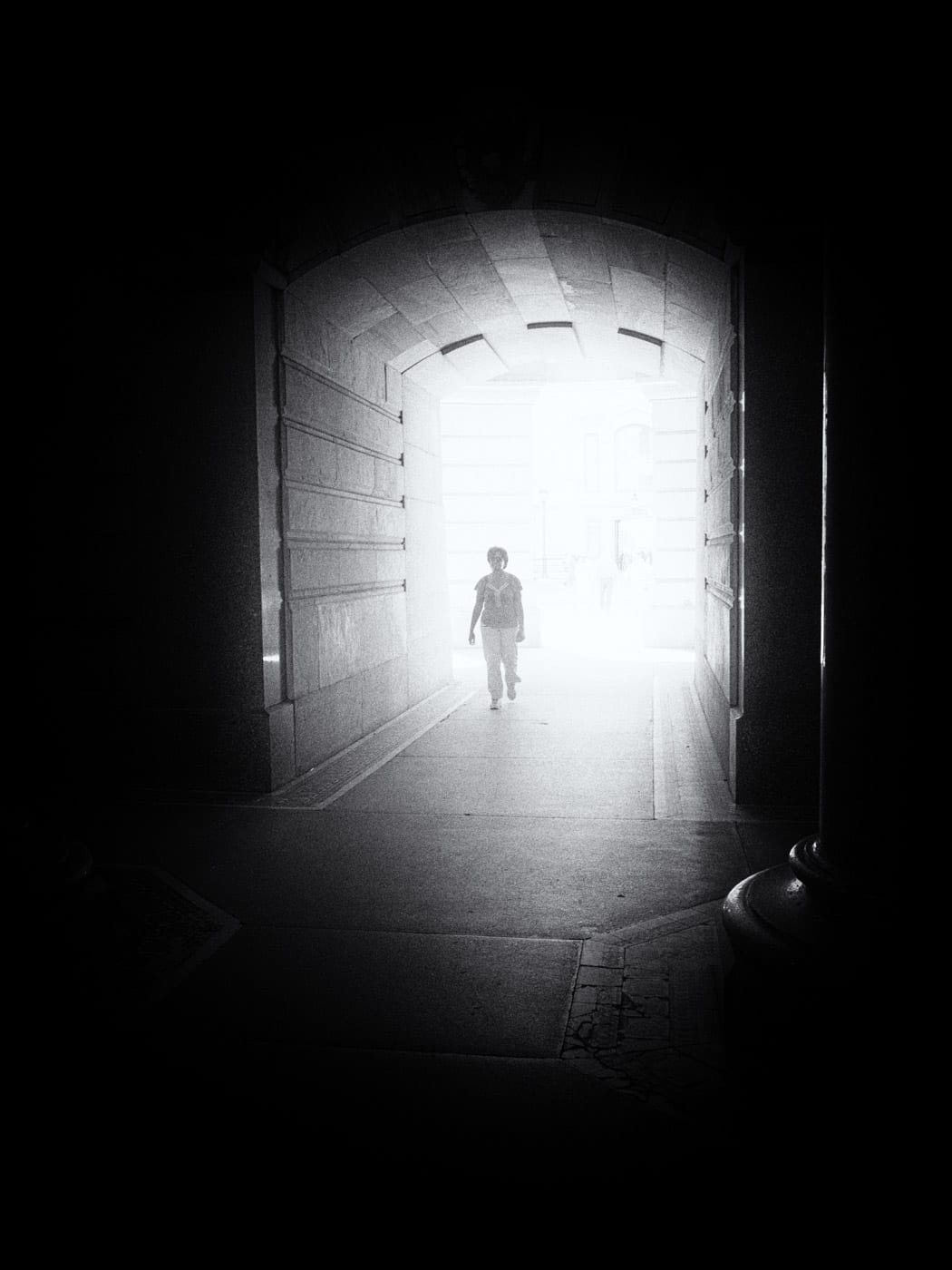 So I hear squabbling on the camera shelf. Oh yeah I hear it I tell ya and my shrink at the VA says I hear it too soooo? Well, anyway as it turns out Andre’ the Fuji X100s and Garry the Nikon Coolpix A got into it. No fist were thrown, c’mon cameras might talk and curse but they ain’t got no hands to fight with. So that means in a camera battle, features are what wins the war. As it turns out Garry the Nikon Coolpix A decided he wanted to move and find a new partner. Andre’ and Walker the Oly Pen EP-5 were both happy. So I packed Garry up and got him ready for someone to love him. In actuality, I have only made 701 frames with him and that’s not using a camera at all and he’s right, he should be with someone that will appreciate him and use him.

Then Penelope the Ricoh GRD4 jumped to my shoulder and whispered in that sweet voice she has, listen babe, I got you covered and you know that. Never worry about the guys, it’s you and me on the long run. 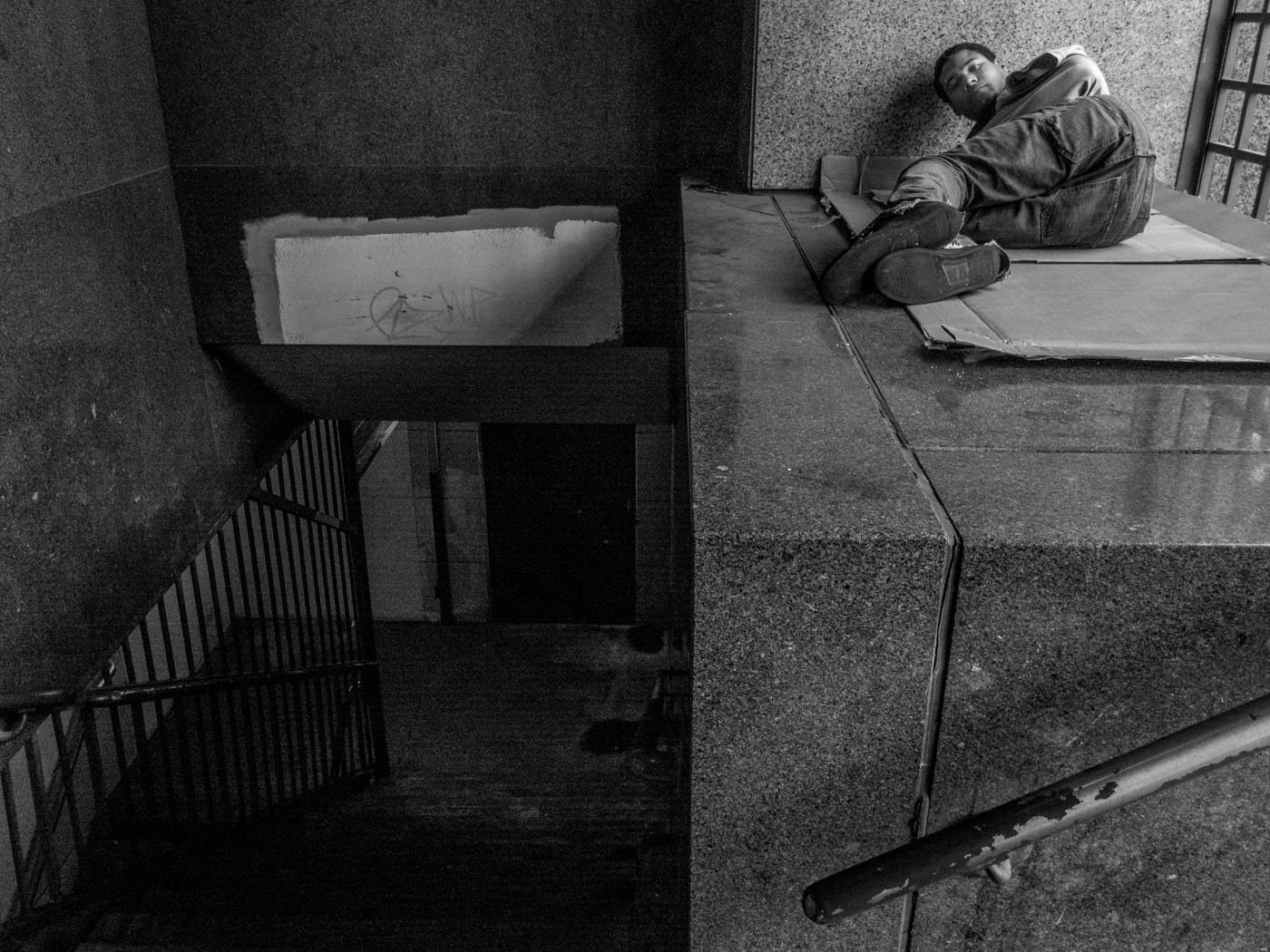 So I realized she was right and started to feel calm again. I put the add up on eBay for Garry and he was acquired in a fast auction. He’s moving to Portland Oregon. So that allowed me to make a deal on a Mint Condition Pen EP-5. So now I have a pair and how sweet it is.

I remember being an Admin at MU-43.com with Amin. I was ecstatic when the Pen 1 came out. I fell in love immediately and then the Pen 2 and the Pen 3. The Pen EP-5 takes the line to an entire to range. I just love this camera.

Enuff camera chatter………… So I’m on 9th Street walking south and I hear a voice call my name. I stop, turn around and I see 3 ppl with cameras dangling around their necks. (All 3 are members of the Inspired Eye and Flickr stuff, so I won’t mention names)…. 2 guys and 1 girl. They are in their mid 30’s. S we do intro’s and such and they ask me to go grab a bite to eat and chat. I ask what they wanna eat and they respond with Ramen. They just made the right decision. So, I suggested we walk and work the streets as we do. the 2 guys want to walk on the other side of the street. The girl wants to walk with me and ask questions. Sure… we start walking…. westbound on Market and have to get to 18th Street. 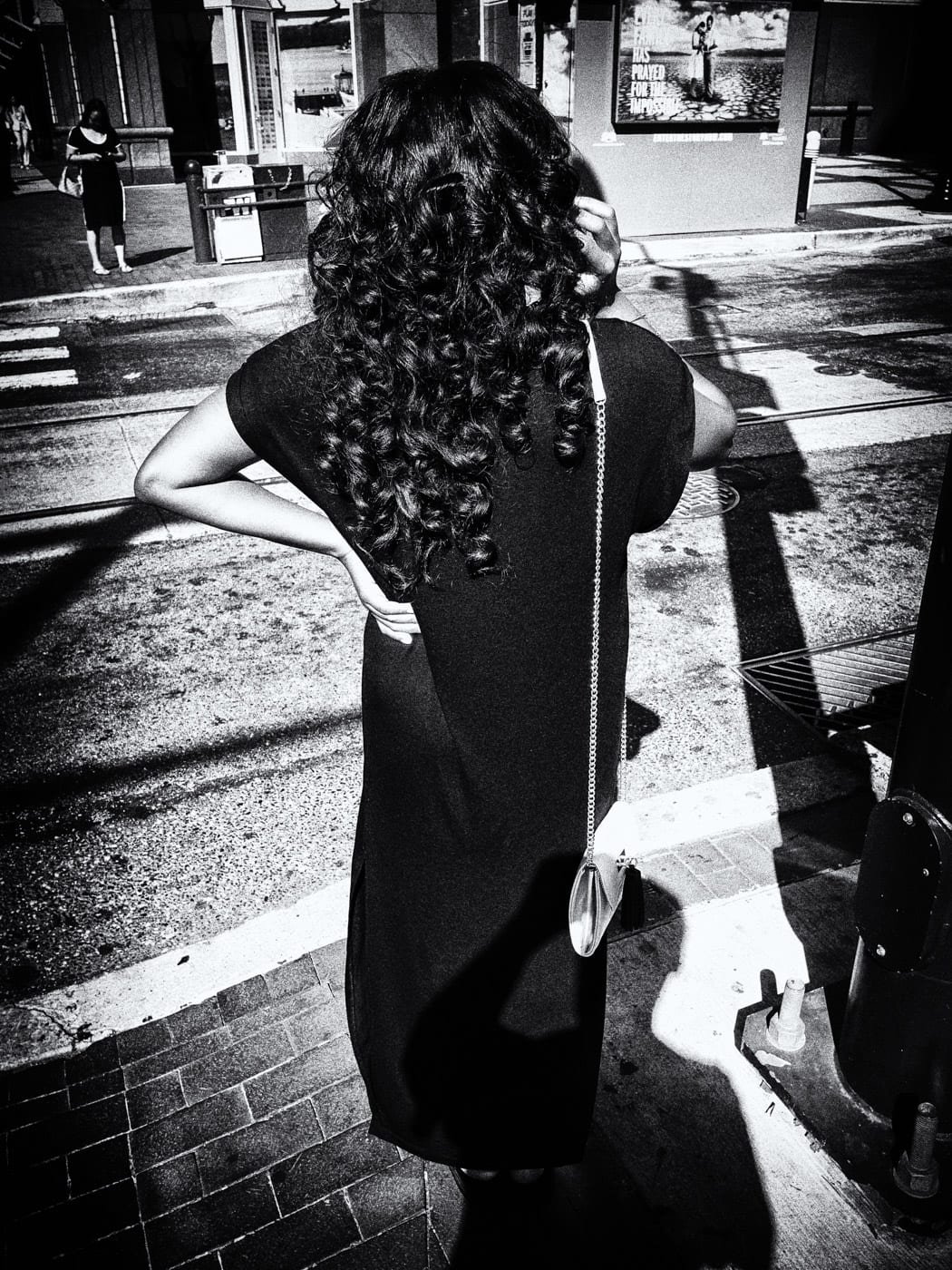 So we get to 12th Street and I saw this. Quickly I frame and ….click!  So the girl says, can I see the photo? Sure but it’s not born yet till I butcher it up in LR. She looks at the screen on the camera and states, you did that so fast, how could you even see it? Here we go, I start to explain that we need to be tuned into the environment and be at the ready when something tickles our fancy.

The she says, the sin of all time to me…. “but you didn’t observe the rules of street shooting”.  I didn’t have any toilet paper so I couldn’t take a dump and I was totally beside myself. I looked her dead in the eyes and I said, what f***ing rules are they and who the F*****k made them and taught them to you? So her and I stopped at 13th street and sat on a bench. The guys kept walking. She apologized for saying I was breaking the rules. I told her I need a saw so I can cut her head open and reprocess the thing in there called a brain. She smiled. 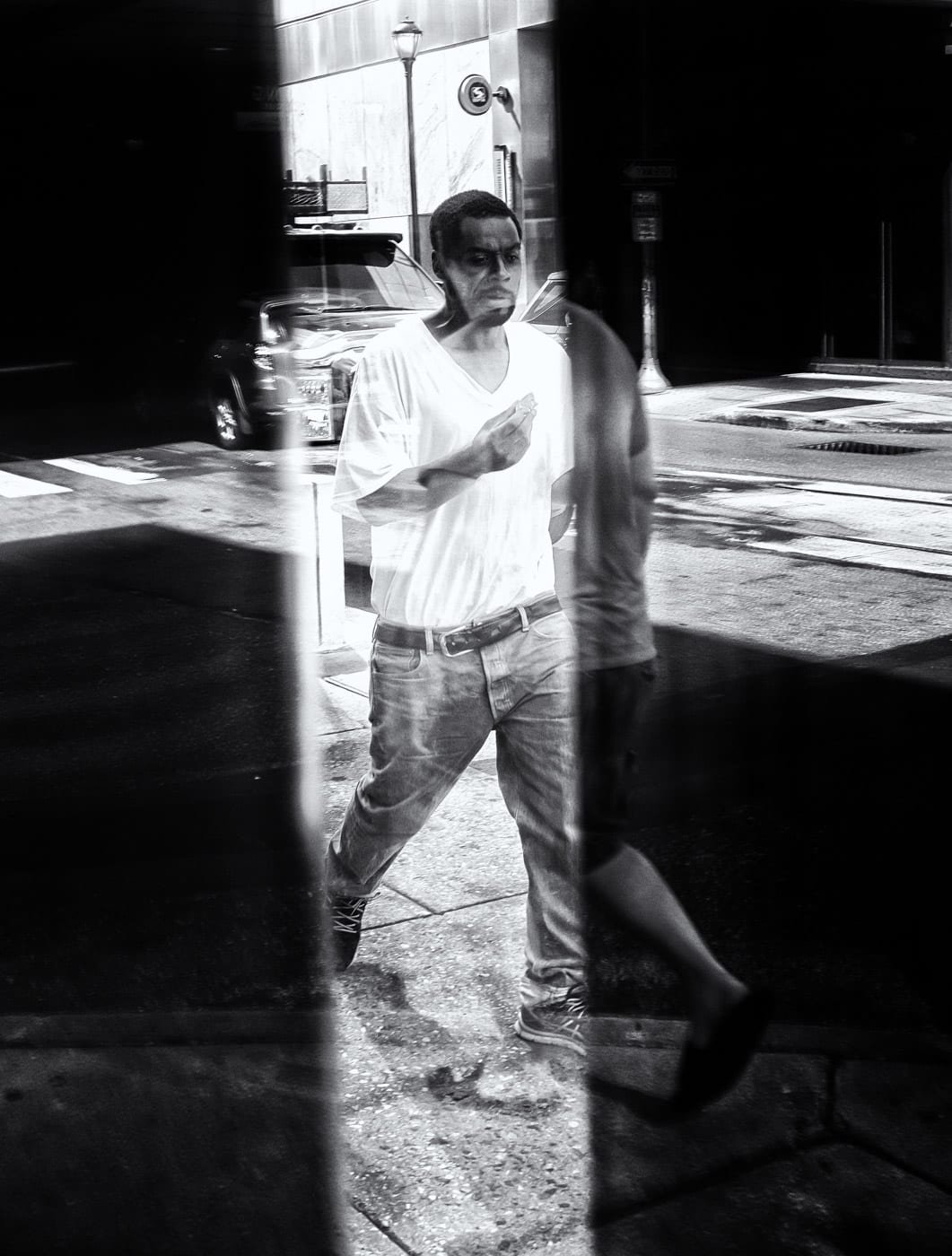 So she started telling me about how she felt so inhibited and inept at making photos on the street. She said that every time she was out shooting, she was afraid to be doing something wrong. I felt really bad for her, I mean she is very nice, dedicated, sincere and her optimism was extinguishing. So she asked me if I did workshops and I stated that I don’t anymore but I have been working with 2 woman about her age from Japan. I said I would call the and if it was ok, she could join our sessions. She was excited and asked how long to find out, I said a few minutes. I called Polly and she agreed next session that she could go. I told her that her boyfriends were not invited. They aren’t my boyfriends, they are my brothers. ….cool. 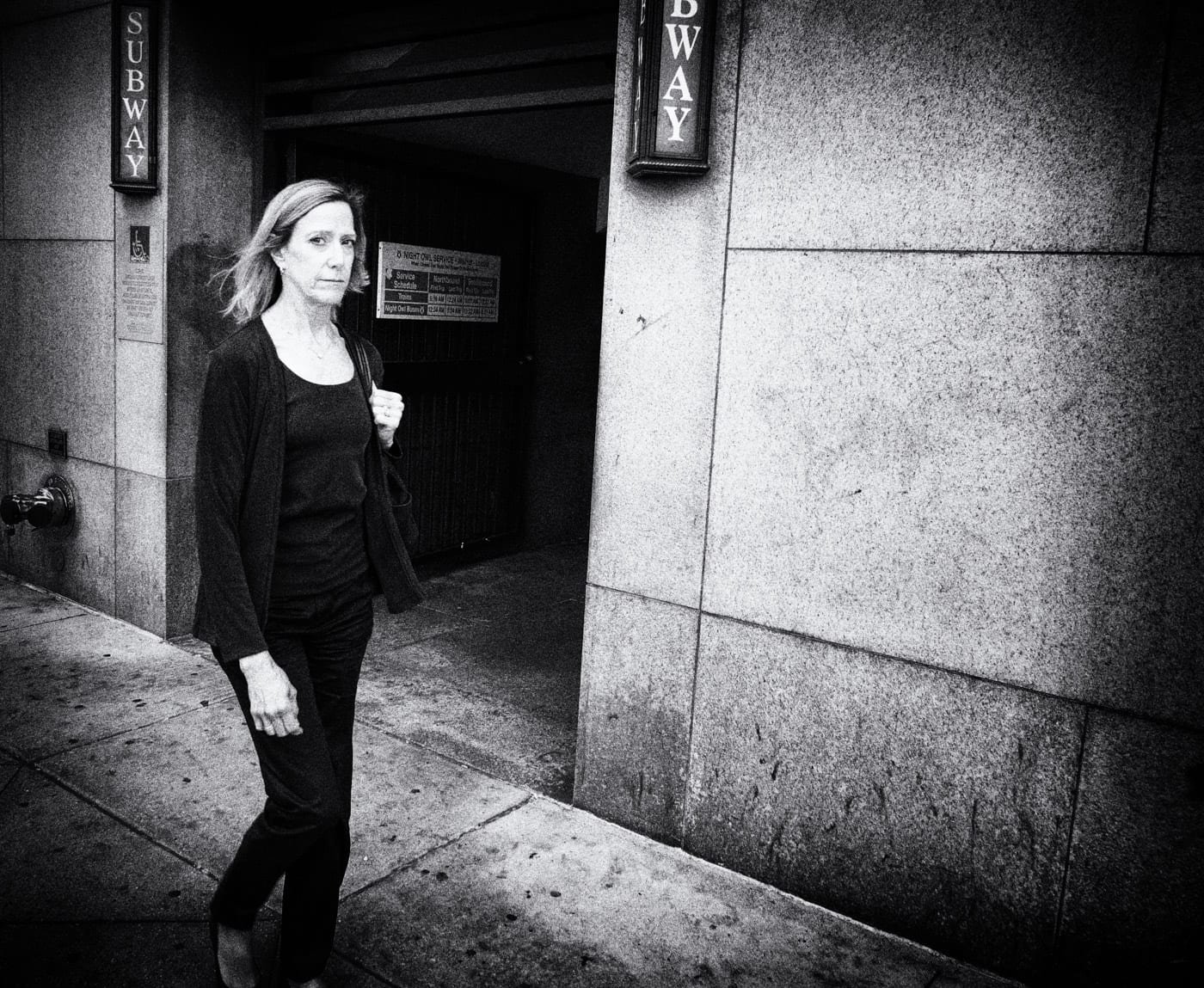 So I set a morning session up for Monday and even the POPE might attend…..

I asked if she could explain the rules of photography to me and she tried. “Street photography must be… it can not be, it has to have…. you can’t do this…..” So I told her that she has to free her mind and change her way of thinking.

She says that her teachers… told her that street is an attitude, or a way to think, etc. She asked me what I felt street was and I told her, street is a place to make photos. Attitude, come with me to Kensington Ave and make photos of the hookers, junkies and cops… now ya have attitude.

The beauty of art is, we are all in the same boat in the same place and yet those true to heart see things differently and attempt to make their art more of themselves then of and for anyone else. She had a glazed eye look about her and I recognized it because I adopt that look when I but a camera and Tanya finds out… I kinda just sit like a little boy with glazed eyes and act like I’m sorry for being bad.

Dinner time so I’ll do more tomorrow….. I promise it will be interesting…..