Notice: WP_Scripts::localize was called incorrectly. The $l10n parameter must be an array. To pass arbitrary data to scripts, use the wp_add_inline_script() function instead. Please see Debugging in WordPress for more information. (This message was added in version 5.7.0.) in /home/u647418100/domains/streetshooter.net/public_html/wp-includes/functions.php on line 5775 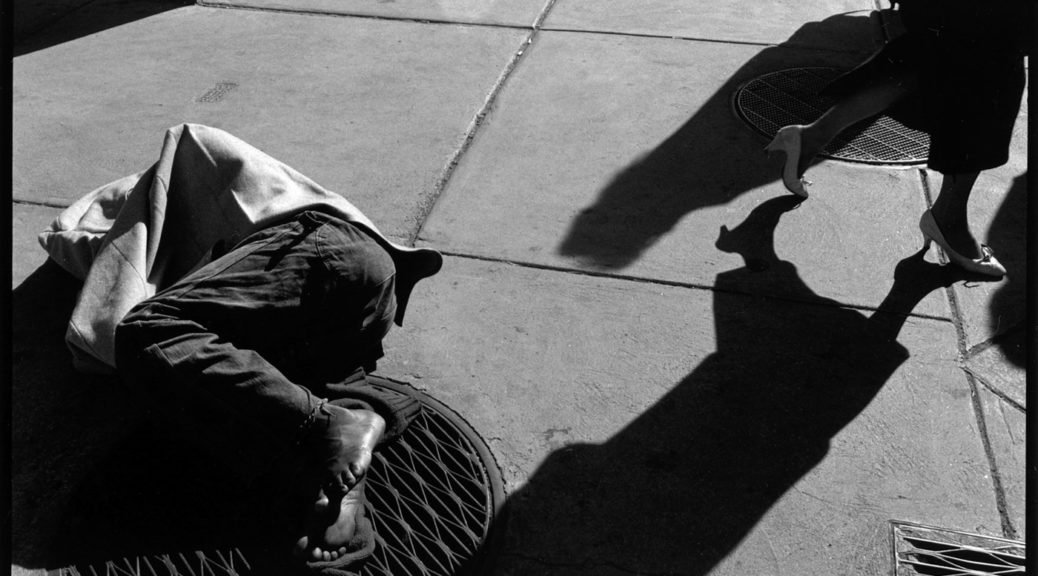 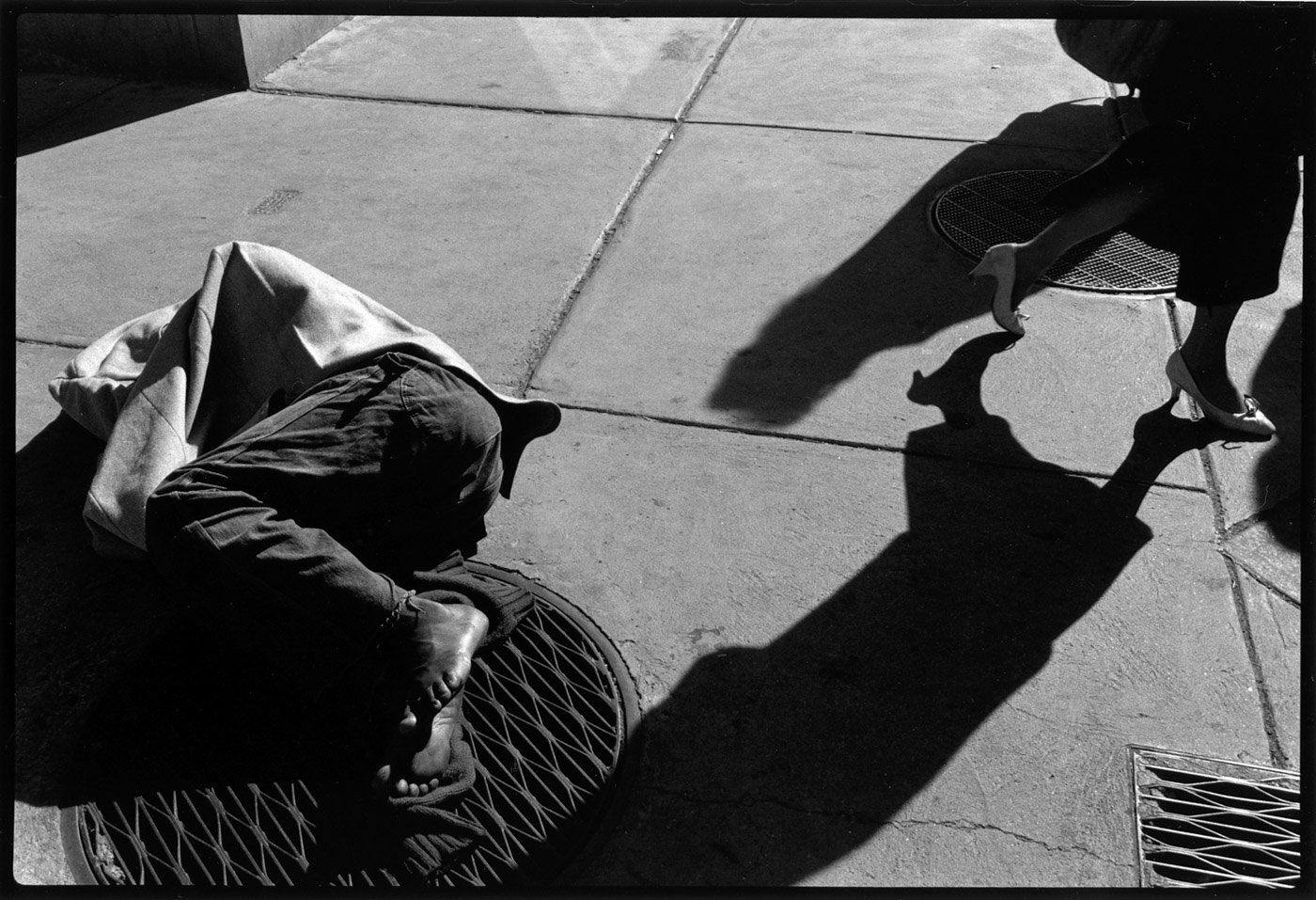 My wife was pregnant with our son Paul. I had a short time to hit the streets. This is at 18th & Walnut. I used Andre’ the Leica M4, I saw the light and that’s what I was attracted to. Then this guy comes and lays down right in front of me. Even then I didn’t like making photos of homeless people. I did tho because, in my mind and heart, I wasn’t exploiting anyone. Not much was happening and I waited to see if anything would develop. I was just about to leave when I saw a few well-dressed ladies walking towards me. Closer and closer and then very close. Two of the ladies walked faster than the lady in the rear. Mother Light was gracious and started shining brightly. I started to feel a photo and then the 3rd lady, walking past the man and me as if we didn’t even exist. I looked at the shadow of her high-class shoes….click. 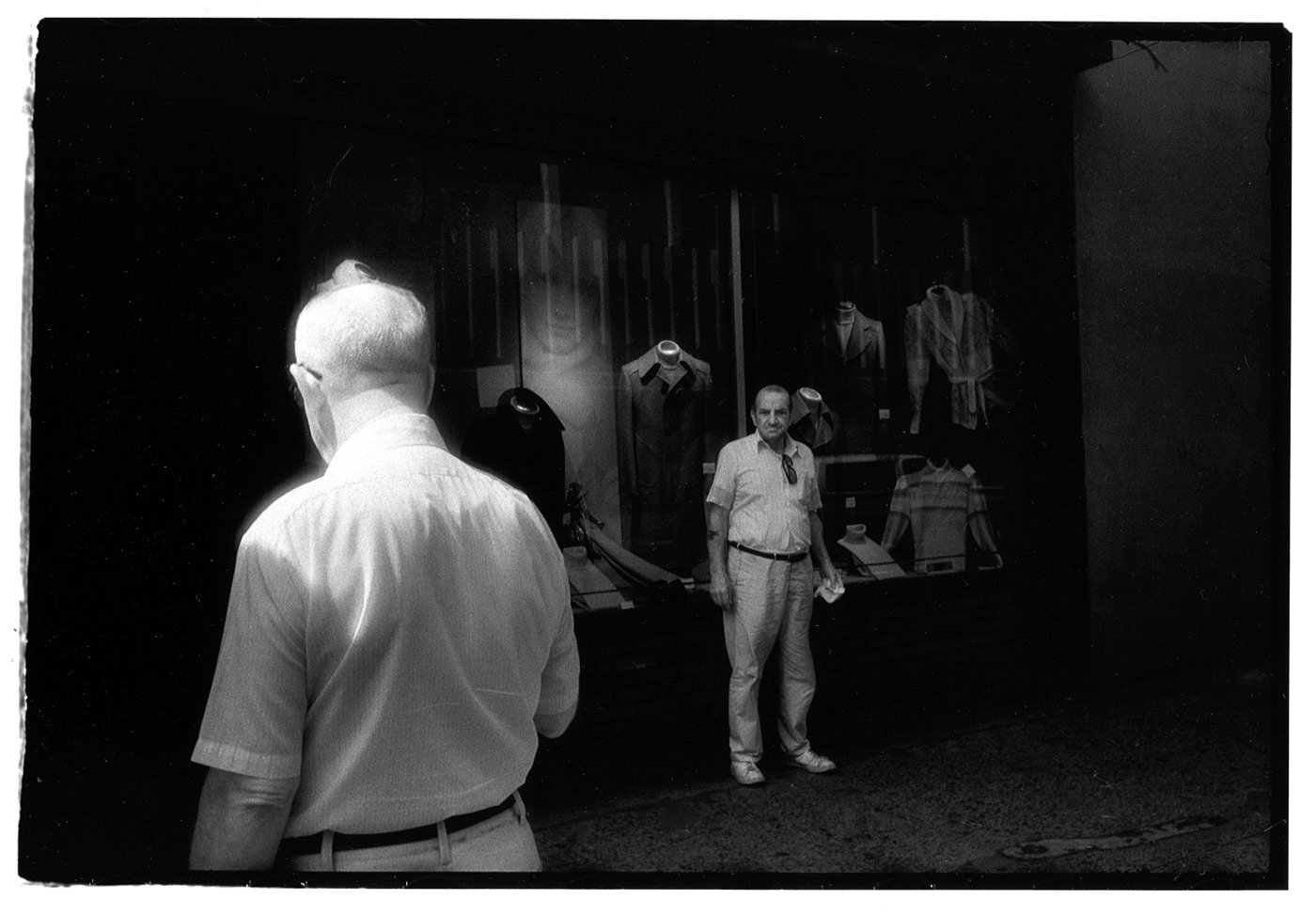 Kosmin called me and told me he had a special deal on film for me. So I went to the store and he told me he had a lot of 35mm Infra-Red film. The rolls were 20 & 36 exp. Well, he charged me $50..00 for 90 rolls of film, a changing bag, and sold me separately, 10 Leica film cassettes. He told me that if I spooled the Kodak Film into Leica cassettes, I wouldn’t need a changing bag and could load the film in the camera the same as always. No FOG! He said, just count 3 to start the roll. I went to the darkroom in the store and loaded a roll in the Leica cassette. Well, I thanked him as always and started home. I never used a light meter and still don’t like them. So I guessed exposure and made some snaps on the way home. I believe the shot above is the first with the Infra-Red film. When I processed the film, I was amazed. It’s like I see this in my mind for years and didn’t know how to make it. I spent about 3 years using this film and used it for everything. I was loving the way it made me see light. 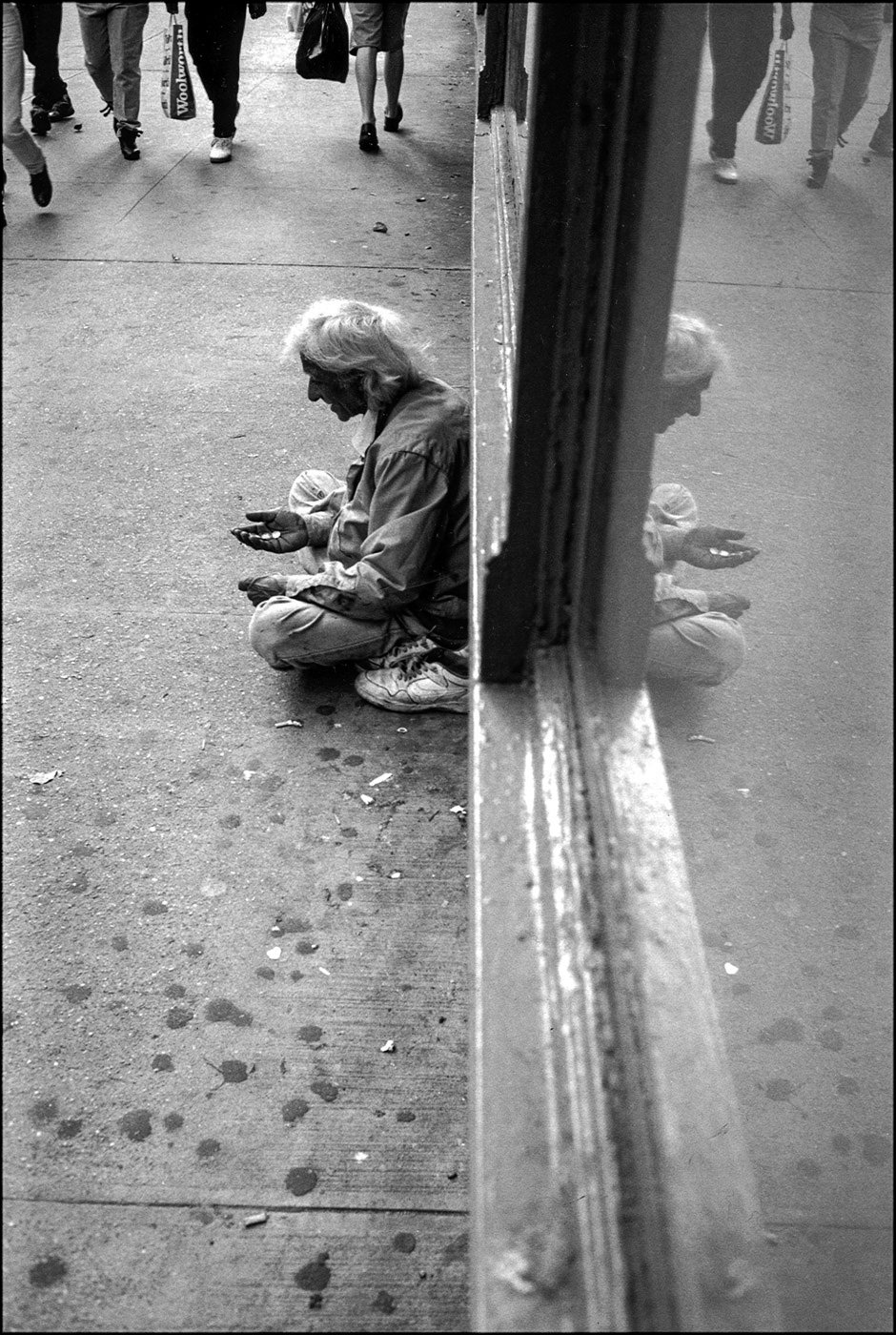 I was walking all around time square and wasn’t feeling anything. I think I shot like 1/2 roll of film. I had the Black M6 and haven’t really used it that much. I had the M4 also as a backup.  I saw that Ralph Gibson was doing ads for  Leica and as much as I was into my M cameras, I was intrigued by the M6. For me, making the transition to the M6 was a major experience. The camera for me is my friend and we have a creative synergism. I feel the image and feel the light and set the exposure intuitively. I have been doing that since 1970 in Nam. Now the new kid in town had red lights inside. The connection for me has changed but I committed to adapt.

I’m walking on the side of Macy’s and it’s hot and humid and stinky. I see this man sitting against a wall and he seemed kinda mellow. I leaned against a wall and made a shot. I walked to him and he asked me to sit so I did. We talked for a while and for some unknown reason, I was at peace, within. I didn’t make any more photos of Khalid. I didn’t feel the need. When we parted company, I felt kinda like a small part of me was being left behind. It was an uneasy feeling, like when you leave home and keep thinking ya forgot something. I didn’t print this photo fro over a year. When I did, Diana bought it and sold some for me,. 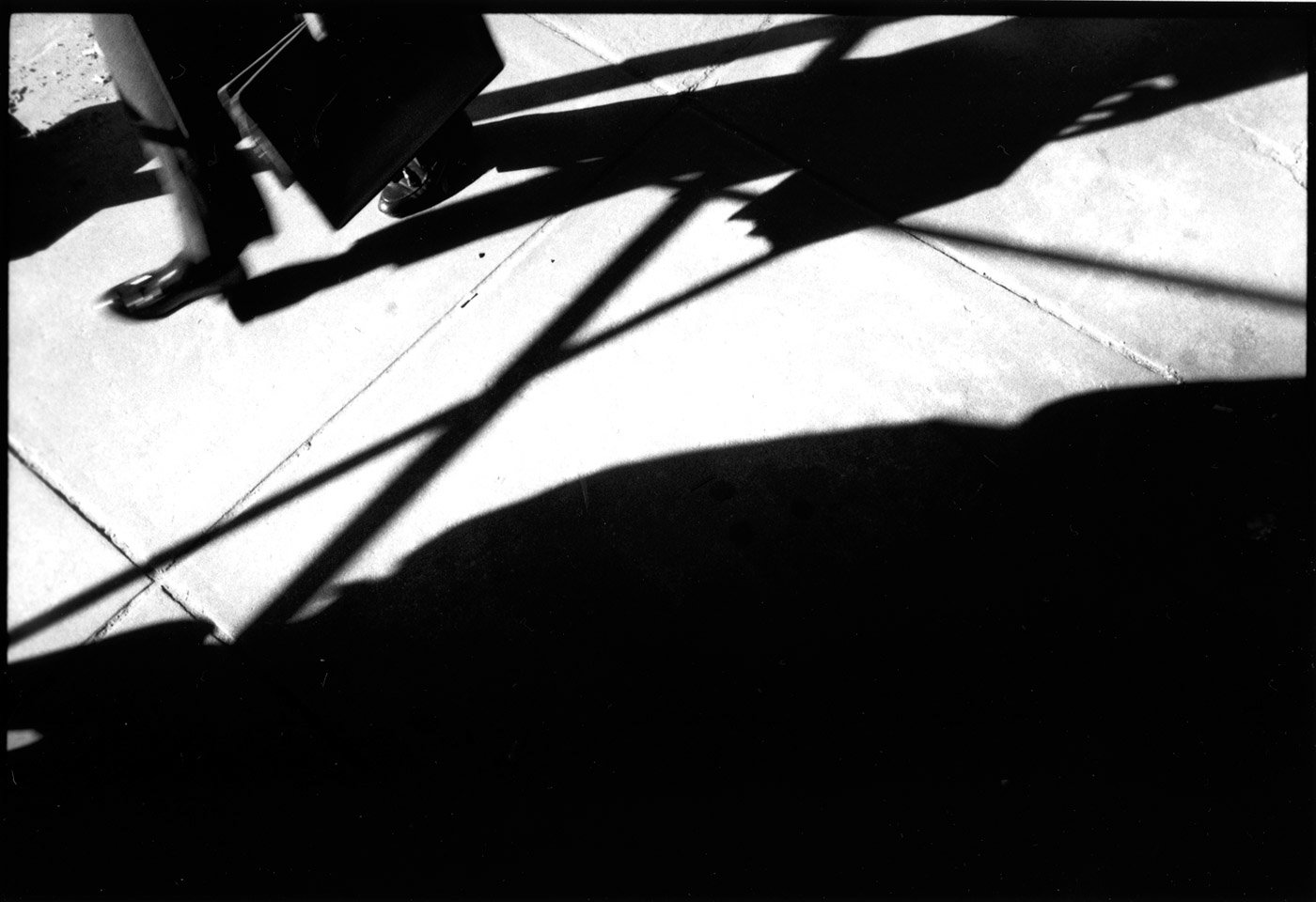 I have been doing shadows and legs etc for a long time. I believe in method and intent. For years friends told me to just make photos and not categorize them. Just work. Well, I wasn’t and still not good about taking orders. Anyway, I found it very helpful to have a series of work or groups, etc. I have some like…. Gambe’ Game, shadows, reflections, icons, public transit. There’s more but this gives an idea of working.

The street is about trigger mechanisms and recognizing them. For me, it became a method by keeping order or my photos. I went against everyone but I have to do it my way. If there’s a solid path for your journey, it is easy to go off and wander around and find your way back. If there is no path, then you just wander around aimlessly and hope you find your way to what?

The other important thing about the organization is, if you ever get bored or lost, you have your history to look at and find the path again. History gives a clear view of where you once were and a guide to where you could go now.

It was really hot and the sun was at full blaze. I was on 17th street and there was scaffolding and I went under it to get out of the direct blast of the sun. I watched people walk past and the shadows and legs were exciting….. then a businessman was walking into view and all of a sudden, the light turned on high intensity and the shadows just captured me …..Click! 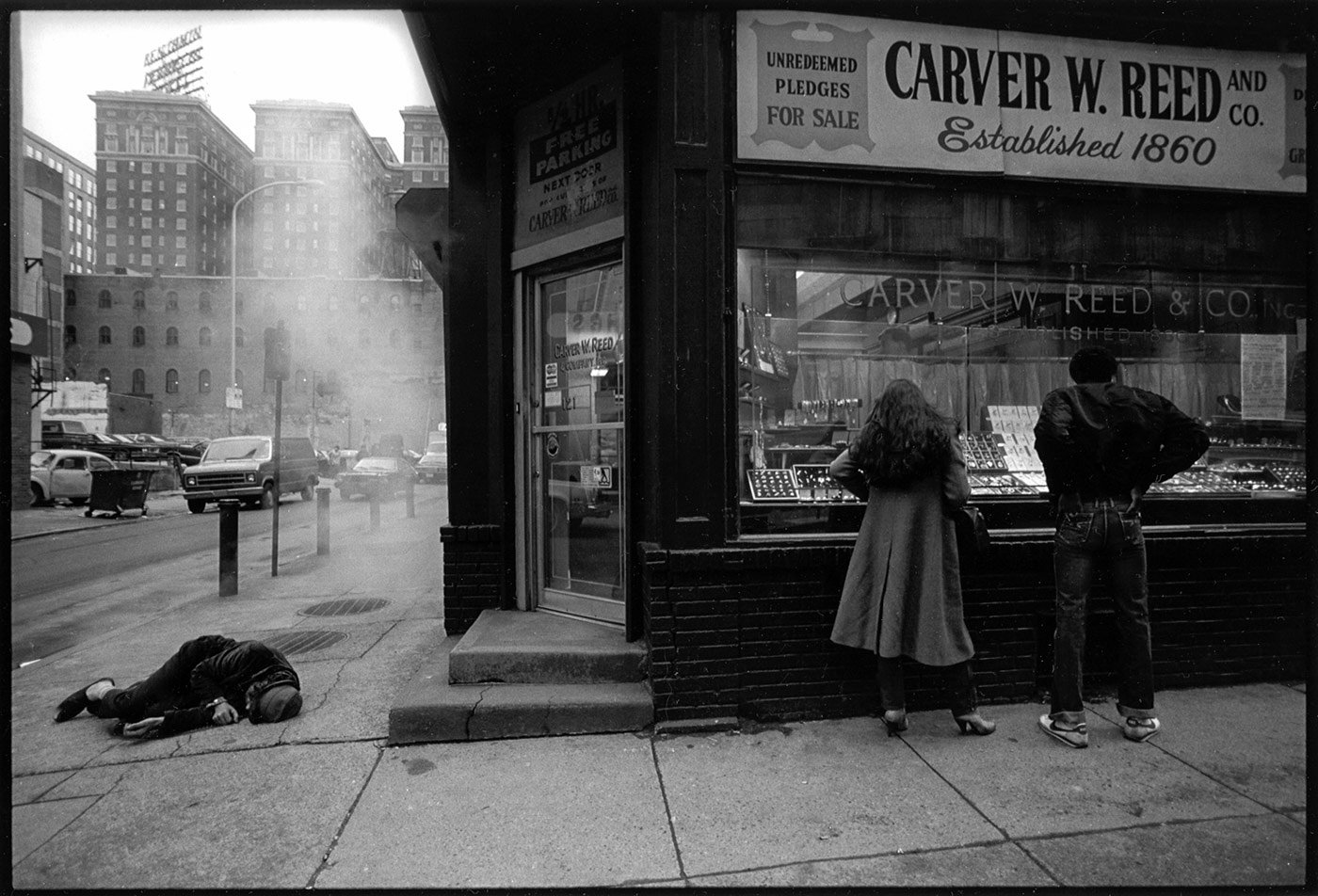 Years before that, my friend Paul and I were looking at each other’s photos. He said to me, “nice juxtaposition Don”. I was badass man, I didn’t flinch.  I had no clue what juxtaposition meant. I went to the library the next day and asked the librarian about the meaning. She got a dictionary and explained it. Now I was a juxtpositioner and I knew how to be all that and more.